Cut It Out – The Late Art of Henri Matisse 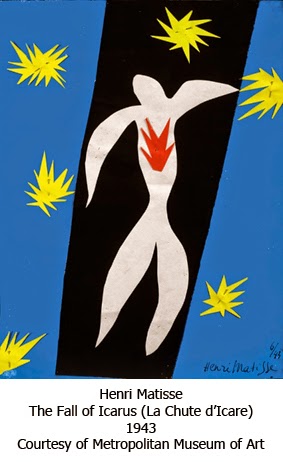 "Space has the boundaries of my imagination"
Henri Matisse

At the age of 72 the French modern master, Henri Matisse was diagnosed with colon cancer and underwent surgery that left him chair and bed bound. Whilst he was unable to work at his easel, the creative urge burned bright and he turned the walls of sick room into his canvas.

Assistants would paint sheets of paper with gouache paint, often in bright colors, from which Matisse would cut a variety of shapes, a process he described as “drawing with succors.” These were then pinned to the walls literally covering the available space from floor to ceiling. They were rearranged until a composition was made that met with the master’s approval. "He knew what he was looking for," one of his assistants is reported to have said, "but we didn't."

It was a technique Matisse had been using since the 1930’s to sort out compositional ideas for his paintings which he now adopted to become the works themselves. Once he was happy with a composition the cut outs would unpinned from the wall and glued to a support.

When first exhibited these gouaches découpés (cut gouaches) were seen as the ramblings of an old man. But, as always, Matisse was at the cutting edge of art, he was a leader not a follower.  The work, The Fall of Icarus underscores the point. It was made in 1943; Matisse was living in the war zone that the south-east France had become with German troops in the basement as allied shells exploded in the garden.

Reports suggest that the activity in the studio was frenetic even after the war with another of his assistant’s saying “It was a race, an endurance course that he was running with death." A regular visitor to the studio was his friend and rival, Pablo Picasso whose girl friend, Françoise Gilot, is reported to have remarked "It was pure joy to be able in 10 minutes to do something that was of now, now, now."

It is a chord that has struck a resounding note with modern audiences. London’s Tate Modern 2014 exhibition Henri Matisse: The Cut-Outs had over half a million visitors, the museums best attendance in its history. No doubt New York’s Museum of Modern Art is hoping for a similar result with its presentation of the exhibition which is on show until the 10th of February. 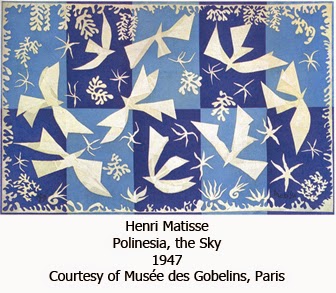