The Stuff of Memories 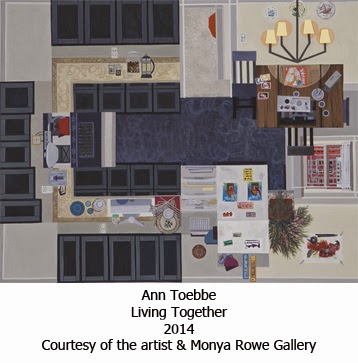 “After the cups, the marmalade, the tea,
Among the porcelain, among some talk of you and me”
T S Eliot – The Love Song of J Alfred Prufrock

2015 is the 100th anniversary of the first publication of the American/British poet TS Eliot’s best known poem The Love Song of J Alfred Prufrock. A 20th Century masterpiece of introspection this dramatic monologue by speaking indirectly to the reader Eliot unpacks the character’s personality and insecurities in a setting of light sophistication.

The Ohio born artist Ann Toebbe uses a similar device to tell the narratives of her own life and that of the people she knows through her mostly interior renderings of the spaces they inhabit. As she told Bad at Sport’s Caroline Picard, “I started using domestic settings in New York in my twenties. I lived in Brooklyn and was homesick. I had no real intention of returning to Ohio but at the time everything in my life was topsy-turvy and uncertain. I stumbled into painting interiors because it felt comfortable and so many things about living as an artist made me uncomfortable.”

Avoiding the direct confrontation of the portrait, Toebbe depicts her subjects through the arrangement of their furniture and the bric-a-brac that surrounds their lives using a bird’s eye view. Relying on her subject’s descriptions and their memories Toebbe’s folk art inspired multi-media works are like “boxes with the lid taken off.”

As she further explained in her interview with Picard, “There’s a story behind each painting and collage. In the early work they were my stories — sleepovers at my grandmother’s farm, mopping my kitchen’s white tile floor, the neighbors messy house where I babysat. In the newer work I ask people to draw and describe rooms from their memory — my husband’s apartment with his ex-wife, my mom’s attic bedroom growing up, my uncle’s one bedroom apartment.”

Whilst the majority of Toebbe’s work concerns interiors she does occasionally venture outdoors but her constructed myths still maintain the objectivity of detached observation, almost a clinical view, which Mr. Eliot might well describe as being “Like a patient etherized upon a table.”

Ann Toebbe’s current exhibition Remarried is on show at New York’s Monya Rowe Gallery until the 22nd of February. 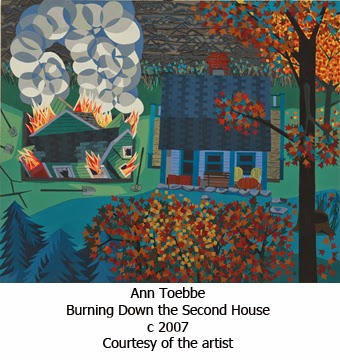