The Irony of Hope – The Art of Fahamu Pecou 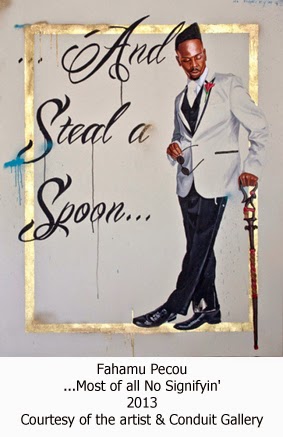 That the police in Ferguson, Missouri and New York City can be found to have no case to answer for the murder of those they are entrusted to serve and protect makes sense in 21st Century America led as it is by a president who condones torture by looking the other way.  The first black POTUS ignoring the sins of his white predecessor translates to the street as impunity for the white cop to kill the black man thereon.

It is a dichotomy that plays through the work of African American artist Fahamu Pecou. Painter and academic, he is working on his PhD at Emory University, Pecou’s paintings are unashamedly political, a counterpoint to the mass media spectacle of being a black man in America. As he told ARC Magazine’s Nicole Smythe Johnson, “The whole idea of rappers for example, we see these images of them plastered everywhere, we see these videos and people don’t know that that’s not how they really live.”

Borrowing heavily from Hip Hop Culture’s graffiti style artwork Pecou often presents a biting satirical social comment on being male and black in America today and how it came to be. In his review of Pecou’s 2013 exhibition How To Eat Your Watermelon, Glasstire’s Darryl Ratcliff wrote “The past hangs heavy over Pecou’s work. No matter what clothes the figure wears or how aspirational the context, Pecou can’t resist including imagery that grounds the figure back into African American history and black urban culture.”

Pecou’s latest exhibition GRAV·I·TY is a series of allegorical paintings that addresses “saggin,” the style which sees young black men wearing pants well below their waist, a metaphorically and physically restrictive practice. As the publicity for the show says “As a society, we often give up on black boys before we've ever give them a chance. We meet them with fear and loathing. We limit their potential with tragic statistics about their potential and stories of their impending death.”


This ongoing call for action implicit in Pecou’s work underscores the irony of the defeat of aspirational hope and change by business as usual in less than a decade.

GRAV·I·TY is on show at Atlanta’s Museum of Contemporary Art of Georgia until the 14th of February. 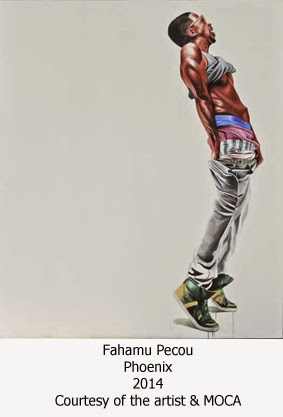