Deliberate Landscapes Have Their Moments 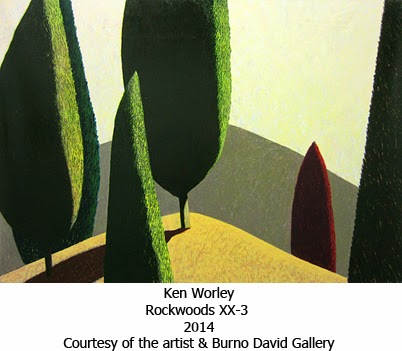 “You have to be under the tree when the apple falls.”
Ken Worley

The New York subway full of sea water or a polar bear stranded on a small piece of sea ice are the dramatic visions of climate change. But all the time in the background nature responds quietly and mostly un-noticed to this human assault that has been described as a mortal threat to human existence.

Although not completely un-noticed, American artist Ken Worley hints at the impending catastrophe in his surrealist inspired semi abstract landscapes. As the art critic Margaret Keller wrote in Art St Louis “Stillness and an Outward sense of serenity pervade all of his work but underneath, the presence (and often implied danger) of nature’s dynamic power and energy is unmistakable.”

Like Monet and his hay stacks, Worley returns to his favorite hunting ground the Rockwoods Reservation, a second growth hardwood forest that covers former limestone, clay and gravel quarry pits in West St Louis County. It is here that Worley makes 4’ x 6’ charcoal sketches which upon returning to his studio he reworks with colored crayons.

From these preparatory studies he creates his large paintings. As Worley works on the painting changes invariably occur. “The arrangement comes out and in the process, I’ll become aware and say ‘Oh wow, that’s a pretty nice thing happening right there,’ and then I’ll enlarge on it. I’d like to think I had it all planned out from the sketches, but then something will reveal itself, and I’ll elaborate on it,” he told the West End World’s Hugh Beall.

Almost like a rural Edward Hooper, it is the forlorn shadows and the loneness of the stark open spaces that makes Worley’s work stand out. As he has said “I just respond to these things in my subconscious.”

Worley’s current exhibition Denizens is currently on show at St Louis’ Bruno David Gallery until the 21st of March. 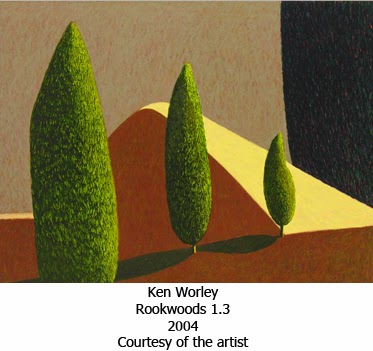 If you want your ex-girlfriend or ex-boyfriend to come crawling back to you on their knees (even if they're dating somebody else now) you must watch this video
right away...

(VIDEO) Text Your Ex Back?