From Paint to Video – The Art of Zhang Xiaotao 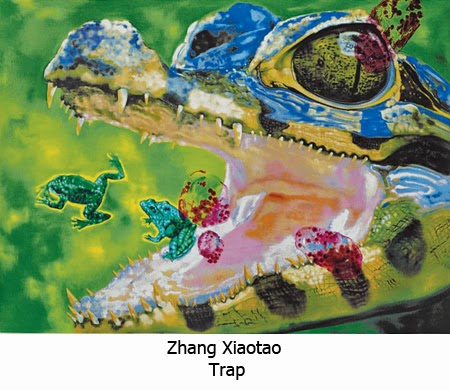 With his work described as “the fables of the social changes and future prospects” Chinese artist Zhang Xiaotao is a painter who has embraced the digital art of video animation. Both examples of his work were on show at the Chinese Pavilion at last year’s Venice Biennale.

His love of comics as a child coupled with the study of the Buddhist and Taoist influenced martial arts and a near death experience by drowning are personal influences that color his art. Living through the cultural transition from the socialist collective ideals of the Cultural Revolution to the individualistic concerns of a market economy likewise informs his art.

Zhang’s large paints from the early years of this century, for which he is arguable best known, utilize both Western & Chinese painting traditions to reflect on his immediate surroundings. “China is huge and chaotic, and it makes you feel tiny and insignificant… I want to express human desires in a materialistic society, people’s instinctive reactions, both physiological and psychological, to living in this era,” he says in a 2002 Artist’s Statement.

But these works are also informed with Zhang’s childhood memories with their often watery connotations and meditations about the spiritual. “These are magnified fragments of our absurd and indulgent materialistic life, and they are also the instinctual misgivings and responses towards this society of material desire,” he says.

In 2010 Zhang co-founded the Sichuan Fine Arts Academy’s New Media Studies Department where he works as a professor. In his private practice as an artist he now works with new media art production examining the paradox between social change and personal spiritual history striving to transmit the personal experience into a public one.

Three of Zhang’s full-length video animation works along with photo stills from the works will be on show at Pékin Fine Arts until the 5th of January.
Posted by Henry Bateman