Christian Tagliavini - a workman of photography 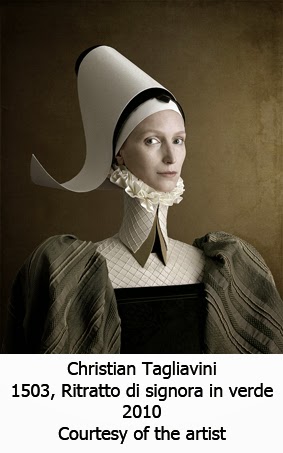 The taking of the photograph for Christian Tagliavini is the final act in a laborious and time consuming process. The photograph is the documentation of his research, design, construction of sets and costumes and casting of amateur models for his historical set pieces.

"But I don't want to be labeled as someone who just makes recreations of historical portraits. I like to think I'm bringing imaginary eras to life," says Tagliavini. And indeed he does, in making his images he mixes artistic influences as he see fit.

In Ritratto di signora in verde from the 1503 series which are based on paintings by Agnolo di Cosimo, known as Il Bronzino, whose date of birth gave the series its name, Tagliavini stretched the model's neck, a la the 20th Century artist Amedeo Modigliani, in Photoshop. The result adds a slightly surreal aspect to the formal Mannerist style of the original.

Likewise the use of cardboard to create the costumes in the 2008 Dame di Cartone series contradicts any semblance of a three diemensional character. As the Telegraph Newspaper’s Robert Epstein says, “It's hard to be a rounded character, he seems to say, when we can literally see your edges.”

In his latest works, the Italian born Swiss resident has channeled the works of the 19th Century science fiction writer Jules Verne. Using three of his novels, Journey to the Center of the Earth, From the Earth to the Moon and Twenty Thousand Leagues under the Sea, as inspiration, Tagliavini has created two series of works, Voyages Extraordinaires and Voyages Extraordinaires Portraits. Eighteen months in the making, he imbues these new works with the aesthetic of 19th Century portrait photography whilst maintaining his own idiosyncratic values. 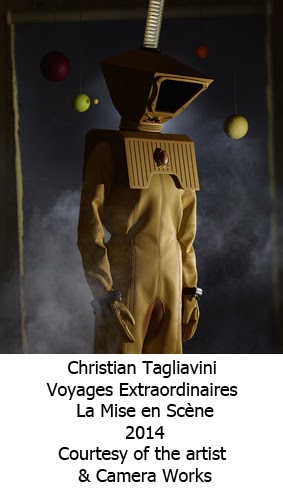 Yet to be officially exhibited a selection of these new works was on view at Paris Photo at Berlin’s Carmera Works booth.
Posted by Henry Bateman