Crowdfunding Is About More Than Just Money 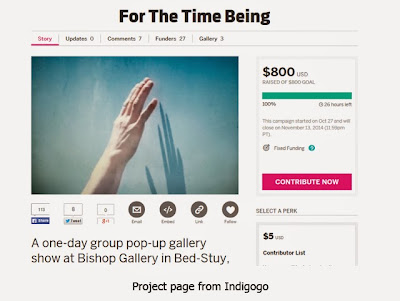 Art Basel which the New York Times described as “the world's biggest and best 20th-century art fair” has teamed up with the crowdfunding website Kickstarter to help fund non-profit arts projects. While the non-profits organize the project Art Basel’s assistance will be in the exposure of the project to their expansive network of supporters along with the kudos of the association.
But crowdfunding sites like Kickstarter, Indigogo and Sponsume to mention just three of the plethora of these sites on the web are not just for the big hitters. They are available for all levels of projects including the modest. At Sponsume the minimum campaign target is just $300.

It’s not a new idea, the Catholic Church, Red Cross, Oxfam, name your favourite charity, have been doing it for years. How it differs is that the money given is going to an identified project rather than an organization’s coffers. And in the majority of cases there is a tangible reward as well as the warm and fuzzy feeling for the generosity.

For project initiators, apart from the money, there is, perhaps more importantly, feedback from their community about the perceived value of the project. If friends and relatives, the most likely donors, are unimpressed perhaps a re-think of the project is called for.

As with any fund raising activity a lot of hard work and strategic thinking is required, perhaps even more than that required for the project.
Posted by Henry Bateman