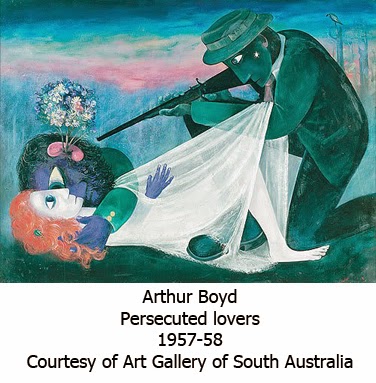 “I’d like to feel that through my work there is a possibility
of making a contribution to a social
progression or enlightenment.”
Arthur Boyd

For Australian painter Arthur Boyd the underside of the human condition was never far from his work. Form his World War II paintings using biblical subjects to express his condemnation of concentration camps to his anti Vietnam War Nebuchadnezzar series; Boyd championed the dispossessed and the outcast. This is especially true of his Love, Marriage, and Death of a Half-caste series commonly called The Bride Series.

A suite of 31 paintings inspired by the plight of Australia’s Aboriginal people he witnessed during his 1951 visit to Central Australia. At Alice Springs and the former mining community of Arltunga Boyd encountered the marginalized living conditions of Australia’s indigenous population. Prior to this, it is said, that he had only seen one aborigine; an itinerant gum leaf player on the streets of Melbourne.

The government policy towards aborigines at this time was one of assimilation during which the stolen generations, the forced removal of Aboriginal children from their families by the state, was common place. It would take the Australian government over half a century before it could bring itself to apologize for this mistreatment.

Back in 1951 this was not common knowledge. Boyd was shocked and depressed by the scenes that confronted him and felt compelled to show Australia the tragedy happening in its midst. But it took him seven years to achieve the emotional distance necessary to start to convert the drawings in his sketch books into the paintings of the series.

These Chargall like surreal works are not pretty pictures, they are magical and somewhat menacing depictions in which it seems the figures and the landscape are as one.  Of the 31 paintings in this elaborate morality tale there are 10 that tell the core story of the courtship, the marriage and the funeral. The Deputy Director of the National Gallery of Victoria, Ursula Hoff, described Boyd’s depictions as “a half-cast wooing a half-cast bride is haunted by the dream image of a white bride and by his fears of white society.”


The core paintings from The Bride Series will be on show at the Heide Musuem of Modern Art from the 29th of November to the 15th of March next year.
Posted by Henry Bateman