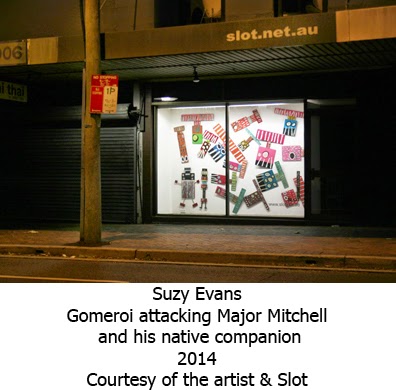 “Some people tend rose gardens in front of their house;


we give art to the neighborhood.”
Tony Twigg

There is a shop window on the city side of one of Sydney Australia’s busiest traffic intersections that displays curated exhibitions twenty four seven. There is no inside behind this façade; the window is the gallery.

This is Slot – a gift by the founder’s, artist Tony Twigg and writer/curator Gina Fairley, to their neighbors and others who pass by 38 Botany Road.  Sandwiched between a Thai restaurant and a coin operated laundry, Slot has been continuously being presenting the work of Australian and South East Asian artists for 11 years.

A privately funded, independent space, it’s not for rent nor is it a commercial gallery or a government funded venue. According to Philippine artist Mai Nguyen-Long who has exhibited there several times Slot “is a gesture of generosity rather than one that sits within the politics of the art world.”

Although Fairley and Twigg shoulder the majority of the curatorial burden they are open to other visions. In 2012 Chloé Wolifson joined them for six months as a guest curator. During that time she curated six exhibitions. “I invited artists to make new work that considered the relationships between people and their urban environment,” she said.

Tony Twigg expanded saying ‘Slot's exhibitions have ranged from site-specific installations to conventional gallery-style exhibits. It's an obvious but nonetheless important point that with a window gallery the art cognoscenti are abandoned in favor of what Henry Lawson described as ‘the faces in the street’.

As Merilyn Fairskye, the Associate Professor of Media Arts / Photomedia at the Sydney College of the Arts, says ‘what I think is interesting about Slot is that it’s so completely out of context – just look at the neighborhood. It’s unlike small window spaces in other places where there is a context for looking at art and related activities. It is very matter-of-fact; it’s no big deal – you just go past and there it is and it changes every few weeks.’
Posted by Henry Bateman