Did He Jump Or Was He Pushed? 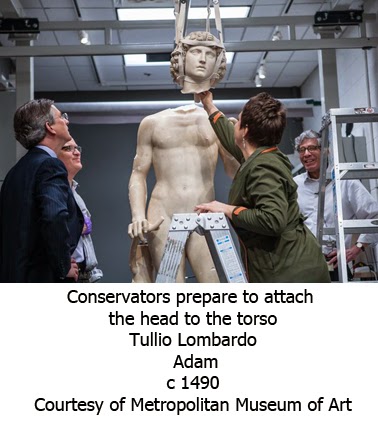 Acquired in 1936, Tullio Lombardo’s Adam is/was a Renaissance masterpiece. Carved around 1490 art historians and curators have waxed lyrical about the work saying, “This sculpture is extraordinary not just because of its art historical importance as the first monumental nude of the Renaissance [that] followed closely the idealism of ancient Roman antiquities, but because it constitutes one of the most profound contemplations of divine and artistic creation, of human beauty and frailty, of temptation and sin and redemption ever realized.”

Because of its significance and that there were enough large sections among the ruins the unsung heroes of the museum, the conservators, were called in to work their magic. Stone is much harder to repair than canvas and for 12 years they labored.

The multidisciplinary team assembled included conservators, conservation scientists, and Curators who were joined and supported by materials scientists and engineers. They researched materials and techniques which resulted in the use of fiberglass pins rather than the tradition steel. They used laser imaging technology to create a virtual 3D model to test how best to put it all back together. They even broke up a copy of Michelangelo’s David in the same manner that Adam was broken to test out their ideas.

Adam went back on display a couple of weeks ago along with details about the conservation. Whether he can gain his former stature is another question. For as the conservators conclude in their report “In the end, while our approach to the conservation treatment may have preserved the intent and impact of this seminal work of art, the fact remains that as a result of the accident the sculpture is not the same, and never can be; the damage incurred from the fall cannot be reversed, regardless of how securely repaired the structure or carefully integrated the surface. We only hope that the memory of the accident and the image of the sculpture in fragments will fade over time, allowing Adam to retain its status as a masterpiece of Renaissance art.
Posted by Henry Bateman