Similar but Different – The Art of Wifredo Lam 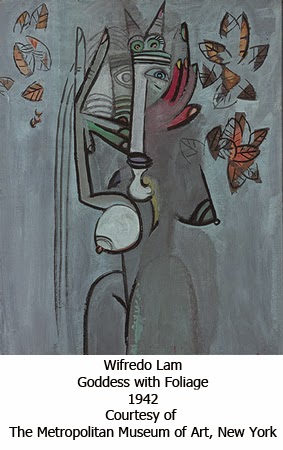 Where European artists of the 1930’s were fascinated by African culture for the Cuban artist Wifredo Lam it was a lived experience. With a Chinese father and a mother of mixed African and Spanish descent, Lam grew up in rural Cuba where the influence of his God Mother, Matonica Wilson, a locally renowned sorceress and healer was constant reminder of the culture that surrounded him. In his 40’s, Lam reconnected with the roots of his childhood culture by visiting Haiti to observe voodoo ceremonies which mitigated by his love of African poetry were to influence his mature works.

After three years in Havana studying law and drawing the plants at the botanical gardens, at the age of 21, Lam traveled to Spain. For the next 14 years he studied the art of the Europeans and painted the Spanish landscape. His Cuban slave heritage caused him to emphasize with the Spanish laborers and prompted him to side with the Republicans during the Spanish civil war.

After the cessation of hostilities Lam moved to Paris. It was there that he met Pablo Picasso; it was a meeting of like minds. About which Lam said “Everybody felt this influence, for Picasso was the master of our age. Even Picasso was influenced by Picasso! But when I first painted bulls in Spain, I had not seen his bulls. And I had done my own paintings in a synthetic style, in an attempt to simplify forms, before discovering his. Our plastic interpretations simply coincided. I already knew the Spanish temperament, for I had lived it, suffered it, in the country itself. Rather than an influence, we might call it apervasion of the spirit. There was no question of imitation, but Picasso may easily have been in my spirit, for nothing in him was alien or strange to me. On the other hand, I derived all my confidence in what I was doing from his approval.”

Three years later after a short sojourn with the surrealists in Marseilles and Martinique Lam returned to Cuba. The exploitation of his home country affected him deeply. Of which he said “I Decided that my painting would never be the equivalent of that pseudo-Cuban music for nightclubs. I refused to paint cha-cha-cha. I wanted with all my heart to paint the drama of my country, but by thoroughly expressing the Negro spirit, the beauty of the plastic art of the blacks. In this way I could act as a Trojan horse that would spew forth hallucinating figures with the power to surprise, to disturb the dreams of the exploiters.”

A decade later Lam returned to Europe, first to France and then to Italy where he remained to the end of his days in 1982. Throughout this time he kept a keen interest in the events of his homeland submitting works for exhibition there in solidarity with his peoples aspirations.

Whilst the parallels between his work and that of the European modernists are undeniable they come from a different place. Whereas the Europeans have imposed a learned African aesthetic upon their European sensibilities, Lam incorporates a learned European aesthetic within his African heritage. 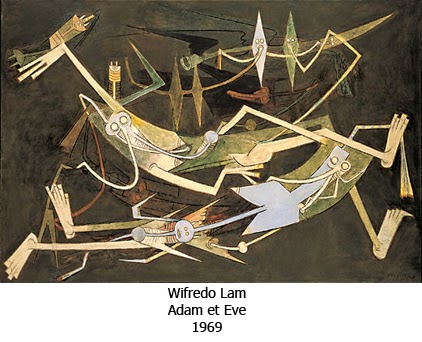