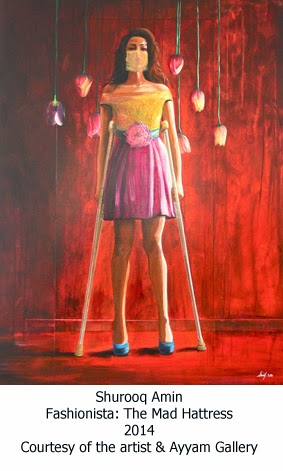 “Will you walk a little faster?" said a whiting to a snail,
There's a porpoise close behind us, and he's treading on my tail.”
Lewis Carroll

The Syrian-Kuwait artist and poet Shurooq Amin has, through her art, become the porpoise of the Middle East challenging the Islamists on their home turf. For as she has said “I address issues that move me or anger me with a sense of injustice in some way: love in the Muslim world, child marriages, gender issues, homosexuality, subjective censorship, political stagnation, etc. I feel that it is a huge responsibility for me to tackle these issues and open a dialogue in society with the hope of instigating social change.”

She came to international attention in 2012 when her show “It’s a Man’s World” was closed by the Kuwaiti authorities three hours after opening to the public. It’s a Man’s World was a follow up exhibition to her 2010 exhibition Society Girls; a pair of exhibitions which explored gender disparities within Arab society.

Citing the pornographic and anti-Islamic nature of the work as reasons for closing “It’s a Man’s World”, the authorities made Amin a cause célèbre for freedom of expression advocates. As Amin told Sampsonia Way  “In the past, I've had Islamists come to my show in anger and huff-and-puff a little, but this is the first time they've blown my house down, so to speak.”

Social media around the world sprang to her defense including a trending hashtag on Twitter, messages of support on Facebook and thousands of supportive emails. Amin’s local, real world contemporaries had a mixed reaction to the incident with many condemned her. About this reaction Amin told the World Policy Blog “Their logic was that I opened Pandora's Box for them! They wanted to “let sleeping dogs lie,” as opposed to broadening minds and enlightening generations and making a difference in society.”

Since then Amin has had two solo exhibitions in Dubai. Popcornographic in 2013 which dealt with issues that are considered taboo in the Middle East whilst We'll Build This City on Art and Love explores issues related to “re-building cities, minds, and beliefs that have been destroyed / deconstructed due to corruption and dogmatic, hypocritical ideologies.”

For as Amin says “In the Middle East, there are unspoken rules that order us to lie and hide our true identity, because our society doesn't condone individuality—it condones conformity.”
We'll Build This City on Art and Love is currently on show at Ayyam’s London gallery until the 10th of January. 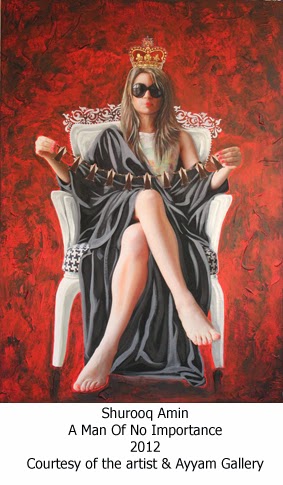