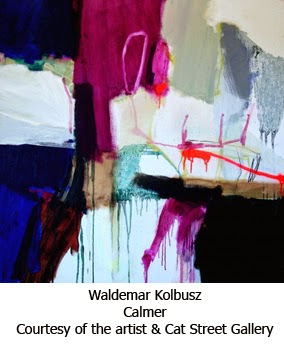 “I did my thinking and arrived at the Grand Canyon.”
Waldemar Kolbusz

It was the picturesque Western Australian port town of Esperance with its Pink Lake adjacent to the Southern ocean and a stone’s throw from The Great Victoria Dessert and the Nullarbor Plain that reawakened Waldemar Kolbusz’s desire to paint. In 1994 the newly minted accountant negotiated his working week down to three days to indulge his passion and two years later he abandoned spreadsheets completely in favor of canvas panels and oil paint.

Nine months of travel introduced Kolbusz to the works of Rothko, Klein, and Motherwell in the flesh along with a personal road to Damascus in the Nevada dessert. As he told Singapore’s Squarerooms Magazine “The desert was a perfect place to develop a new code about my work to do with minimizing toward the fundamental – both in one’s life and then mirroring this in one’s work/art.”

It was a code that saw Kolbusz adopt The New York School’s style of abstract expressionism. As he explained in Isadora Noble’s essay Art Busting for Attention, “I remember being drawn into the images, and being almost aghast at how immensely powerful they were. I was dizzy. They confirmed my suspicions that the sort of painting I was interested in doing contained expression and feeling over exactness and formula.”

The risk manager had become the risk taker, not only in his life but in his painting. As he told the Gold Coast Bulletin’s Marina St Martin, “I begin the work by marking the canvas haphazardly, with just a few general and very spontaneous crops of colour or lines. After a few days I will consider the work more intently and begin the painting process. I always hope to be surprised and challenged by the few marks that are there. They kind of happened with little thought, so I feel as if they are really without my influence. This forms the springboard for the work and it can then broadly dictate the palette and the feel of where the work might head. Of course, things can move from this at any time.”

Now based in Western Australia’s capital city of Perth, Kolbusz career moves have be positive with exhibitions across Australia along with Singapore and Hong Kong. Although his vanity gallery exhibition in New York has yet to bear fruit and a commission from Tasmania’s Museum of Old and New Art is still a dream.

Kolbusz’s current exhibition Aerial is on show at Hong Kong’s Cat Street Gallery until the 13th of June. 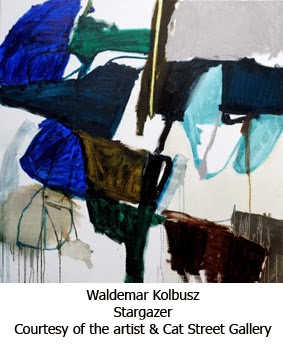