About Making the Best Art Possible 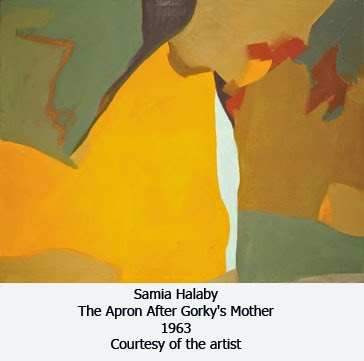 “Art is not holy and is not above other production.”
Samia Halaby

The Palestinian born New York based abstract artist Samia Halaby is very much the pragmatist. As she told the New York Magazine’s Erica Schwiegershausen “I don’t have patience with the postmodern philosophers because I’m a person who wants to deal with concrete things. I believe what I see is real, and I want to paint about it.”

Halaby also rejects the concept that art is self expression, as she says “The stuff comes out of me, but it’s not about me. Our brain is a storehouse of all of the things we’ve seen, and as we process them, we discern the general principles that govern them. Abstraction, being about general principles, can remind you of many sets of things that share the same principles. Abstract paintings are not about specific objects.”

At the age of 12 Halaby along with her family were forced to leave their home in Jaffa during the fighting there as part of the creation of the state of Israel. After three years in Beirut the family moved to the Midwestern United States. After graduated from Indiana University with a Masters in Fine Art Halaby embarked on her career as an artist by becoming a teacher. As she says in her biography “Teaching was then the only way to earn money if your college degree was in the arts.”

After 18 years in exile Halaby was able to return to the Arab world for the first time which had a marked influence upon her work that had mostly been influence by the mid 20th Century European and American abstract movements. As she has said “I went back in 1966 and I visited the Dome of the Rock, which is one of the most amazing architectural monuments in the world. It’s a mosque, and it influenced my work enormously. I saw large, very simple marble inlays of geometric art. The inlays were at least twelve to fourteen feet tall, and some were just a few squares arranged with a black outline. Medieval Arabic art is very much based on symmetry: There’s a repeating pattern with chosen parts represented in a rectangle. So I came back and decided to let the rectangle of the painting determine what I do.”

Halaby has also been active in issues regarding the land of her birth. As she says “I’m very much an activist for Palestine, and I’m a leftist — the two seem to go together. The experience of being evicted from Palestine and losing everything was a very painful one...There’s a deep pain in every Palestinian about it, I think.”

But she doesn’t see herself as a Palestinian artist per se. “As I see it, Palestine need not be in my painting and should not be in my painting. If Arab art and Palestine is in some paintings, that’s because it’s part of my past and will come through as part of my experiences in the real world. But if I’m a painter, I should be a painter trying to do paintings that are the most advanced possible,” she has remarked.

Halaby’s current exhibition Painting from the Sixties and Seventies is on show at Ayyam’s London Gallery until the 18th of July. 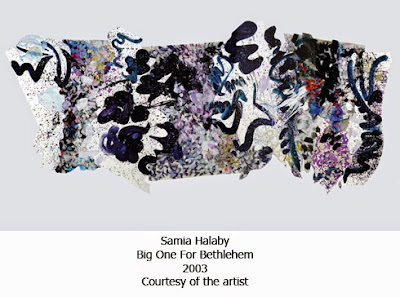