On Keeping it Simple 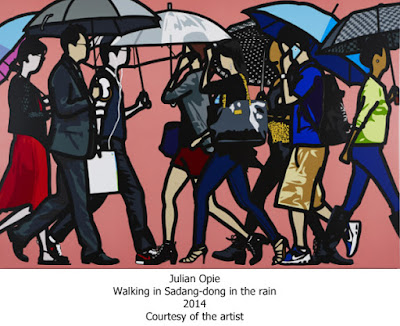 Making art is like running with your eyes shut,
you must take risks and rely on your instincts.
Julian Opie

Described as “the master of the stick figure” British artist Julian Opie likes to make things as simple and as easy as possible.

As he told dazeddigital.com’s John-Paul Pryor “You know there is a tendency to feel that in order for something to be important that it's got to be difficult, and I tend to go the other way. My instincts are always to do what’s easiest – that’s just a rule that I follow and it means that you often end up making things that some people, and even I myself can feel a little dubious about. When people find out that I use photography as the basis for my portraits you can see that they feel a slight sense of disappointment, but frankly a photograph makes it a hell of a lot easier and we all know that the Dutch painters in the 17th century used the Camera Obscura when they could. So what I found, after a while, was that mimicking the computer look was a lot easier by simply using a computer. So I kind of taught myself vector drawing, and the way that works is via a process of cut and build, cut and build – you put pieces of rope around something, and you can make it thicker or darker, then you fill it with color – it’s a constructive Lego-type system of drawing.”

Universally known as the artist who reduces reality to outlines filled with color Opie appropriates the signage of flat pack furniture instructions for his landscapes whilst his figures look like they have stepped off toilet doors. For as he explained to the Guardian Newspapers Dominic Murphy "People are very suspicious once they know something is art. I wanted to defuse that moment of suspicion so that people are given the chance to enter the work visually before worrying about whether it is art or whether they are supposed to like it."

Working across painting, sculpture and computer art Opie brings the everyday and its inhabitants into the gallery. As he told Today’s Zaman “I can only work on [real] people. I can’t just imagine them. These are people that I know. I can only work with contemporary people, not dead people. It is inevitable that everybody I draw has a contemporary feeling. I also think that it would be strange not to draw the world around you because this is the world I know. I don’t like idealization, such as in the ancient sculptures of gods. I like realistic [depictions]; [they’re] more exciting, more mysterious.

And as for the use of computers in his work, Opie has said “Art is always technology. Even if you put paint on [your] mouth and blew like they did 20,000 years ago, that’s technology. The trick is to do something good with it. I use both my hand and the computer. I don’t think one is better than the other.”

Opie’s current self-titled exhibition is on show at Zurich’s Galerie Bob van Orsouw until the 31st of July. 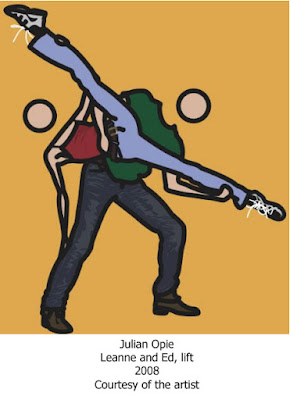