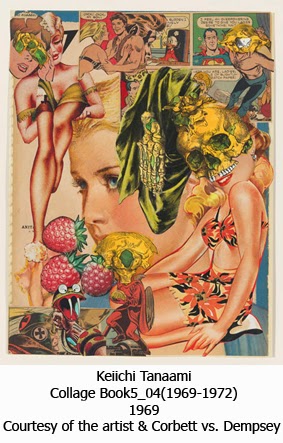 Embracing a wide variety of art forms from painting to sculpture, from drawing to collage, from animation to books and with substantial bodies of work in each, the Japanese pop artist, Keiichi Tanaami is prolific to say the least. As he told Gadabout’s Andrey Bold “I don’t play golf, so I don’t really have anything to do besides work. I let off steam by alternating between different projects. I'd work on animation, then, move on to painting once I get tired, and when I get tired of that switch to writing. I don’t really get stressed working because I don’t see it as work.”

It was in the late 1960’s, after seeing Andy Warhol’s work first, hand that Tanaami decided to embrace a variety of genres. As he says in his biography “Like Warhol, I decided then not to limit myself to any one medium, to just design or fine art, but to instead do what I wanted using a variety of methods."

But Tanaami’s introduction to things American stated a couple of decades earlier as he experienced the firebombing of Tokyo during the Second World War followed by a diet of American B-grade movies after its end. With the latter distorting reality for the teenager, for as he has said “when you are watching over 500 movies a year, the line between fiction and reality gets blurred, and you end up in a state of confusion where truth and falsehood are all mixed up, as though you are glimpsing out at reality from a loophole in the dream world.” To which he adds “I had the most fun making pictures from what I remembered of movies and scenes I had just watched.”

A brush with death in his mid 40’s from an attack of pleurisy that saw Tanaami hospitalized for four months and experiencing nightly hallucinations caused by the drugs he was taking awakened his appreciation for the fragility of life causing a burst of creativity. As he has said “I found a connection between being conscious of death so close to myself and to being alive, and that became the powerful energy that supported my creativity."

With his personal dreams, memories and hallucinations mixed up with Eastern and Western influences Tanaami’s works depict a journey that revels in its production. As he says “The only thing I am certain of is the impact of my childhood experiences. The subjects that are of interest to me – that indescribable sense of touch when layering coats of paints, the process of incorporating inspiration from movies into a painting – are the same for me to this day. My approach to painting hasn't changed at all since my childhood days.”

His current exhibition Keiichi Tanaami Collages is on show at Chicago’s Corbett vs. Dempsey until the 6th of June. 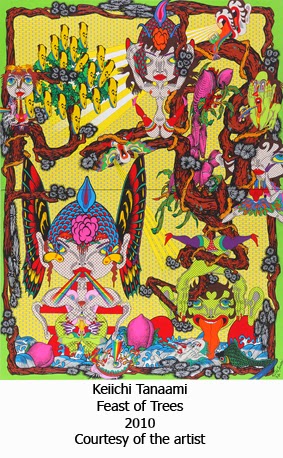