The Religion of Abstraction 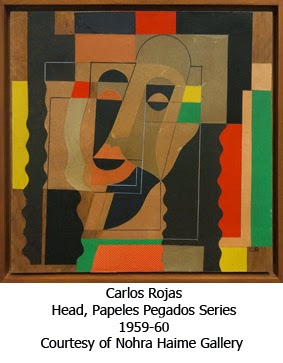 “I always saw the comprehensive foundations of everything in nature.”
Carlos Rojas

In his youth the Colombian abstract artist Carlos Rojas was so frustrated by the insubstantial answers to his philosophical and metaphysical questions that he abandoned the seminary where he was studying to pursue the answers for himself. And it became an eclectic life long journey embracing not only the visual arts but music, architecture, handicrafts, design, technology, science, mathematics and nature, as well as the mystical, of which his art works are his diary.

As he has said, “That which I study, analyze and compare yields some common denominators, which, when agglomerated, give rise to a result, and the result is the artwork.” Such were Rojas’ lines of enquiry that abstraction in its various forms was the best vehicle for his expression, “For me, abstraction is the simplification of elements starting out from a complex naturalist whole,” he has stated.

In their publicity for Rojas’ 2014 retrospective exhibition the El Museo Galeria quoted several of his remarks about his work showing the diversity of his investigations, which included “One day, I suddenly discovered that when my mother gets dressed, she uses a corset. Those garments and bras with terrible shapes that in some way, for me evoked horse tack: cinches, horse blankets, buckles…The colors obey emotional states rather than physical realities. I mean, if I’m talking about landscape – place, I’m proposing a completely personal phenomenon regarding the temperature, the season; a series of variables that comprise the landscape…That is to say, the horizon of the land and the vertical of man, of the overwhelming spirit of a vertical self. On the other hand, it arose from managing life in two opposite directions: the pursuit and denial of a goal…The myth of El Dorado was simply an expression of this need to have greater possession of America: the intellectual power, the power of gold, to mark power over the world, but the American man is in search of his roots and differences…Being part of the essential element of man’s existence, which is his own inner and physical nature. These two combinations produce abstraction and the concrete in the art of human production. So, I think that in this work, you are going to find more psychological and mental, almost metaphysical, associations with nature, with an essential geometric idea.”

For it was the exploration of the metaphysical that sustained Rojas journey. As art agenda reported him as saying, “This is what I call religion: to fight for a purpose, even if the purpose does not exist, even if one knows that it does not exist. What I intend with that absolute perfection is the order par excellence, I don’t care if it exists or not. The sole fact of fighting for it is, in itself, perfection”

New York’s Nohra Haime Gallery is currently showing Carlos Rojas: A Retrospective Exhibition which is on view until the 20th of June. 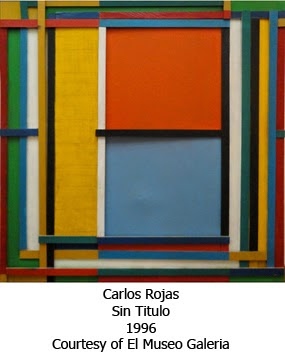