A Quadrille of Color & Form 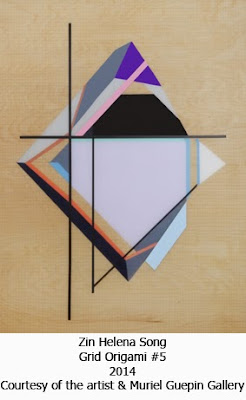 “I like folding paper, and I use it as sketch for my painting.”
Zin Helena Song

In his 2014 review of Zin Helena Song’s work, Visual Art Source’s Robin Dluzen wrote “In four sculptures by New York artist Song, the use of painted corners and actual ones confuse the eye. As the viewer moves round the pieces, you are never able to see all the planes from any one angle.”

Song refers to her works as paintings but they are an intricate dance between color and from in a geometric quadrille that often sees the works take on a sculptural format. As she told GEO/DAY, “During the process of painting, I try to have conversation with the colors, and then find the right colors for the shapes. I used basic color first, but not with much intention. Shape is more intended than color. Sometimes the shapes I used are inspired from Origami.”

The South Korean born Song grew up amidst the clutter of an artistic household, as she explained “My mother used to study design, and my room was piled up with her design collections, like letters, style, typography, pattern, colors, so I enjoyed reading around them.” But her work is influenced by the built environment of her current home, New York City. As she says “I really enjoy the line drawing with cities and landscape. I like straight line drawing. I choose parts of the buildings, sketch the building fragments, and use them for my paintings.”

An integral part of Song’s process is the construction of her canvases which are often three dimensional. As she says in her Artist’s Statement, “when I decide on a canvas shape, I build the structure and make the surface even, which can entail thirty sandings between applications of gesso. During the fabrication process, in my imagination, I draw numerous divided spaces on the canvas.”

When the canvas is complete Song fills in her imagined spaces with an intuitive selection of colors. As she says “I never studied the color theory, I just use colors intuitively.” To which she elaborates “The colors for my works starts with one color and from there I begin to build off of it. Each color plays off the next and this process goes on until the piece is complete.”

As Song’s shapes and colors formally step around each other her hard edge abstraction successfully nods towards a pop art aesthetic. As the publicity for her 2014 Beyond Color exhibition stated “Her pop sensibilities come through in how she meticulously patterns each angle, line and shift, and yet it’s the unique shape of each piece, juxtaposed with vibrant color fields, that lends the work its character.”

Song’s current self titled solo show is at New York’s Muriel Guepin Gallery until the 7th of June. 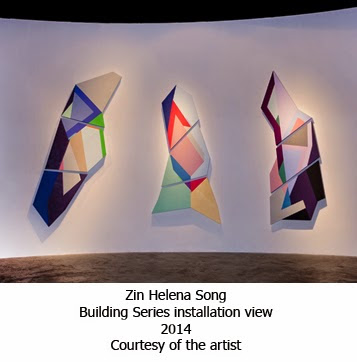