Not Too Big, Not too Heavy 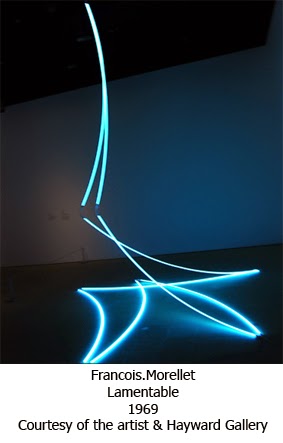 “The beautiful circle hangs down in a pitiful way.”
François Morellet

Humor is never very far away from the work of the French geometrical abstract artist François Morellet. As he told Museum Ritter’s Gerda Ridler “It seems to me that humor, irony, derision and frivolity are the necessary spice to make squares, systems and all the rest of it digestible.”

Best known for his imaginative use of neon in both his paintings and installations, Morellet investigates the confines of a space through the rigorous application of predetermined rules and principals based upon the abstract inherent in pure mathematics like the number ‘n’ and its relationship to its arithmetic counterpart. Albeit the element of chance is not eliminated as it is the beautiful aesthetic rather than the ideology for which Morellet strives. As he says “I’m no great fan of serious, didactic art.”

A sentiment confirmed by Artslant’s Frances Guerin, who wrote in her review of Morellet’s Centre Pompidou 2011 exhibition Réinstallations, “Morellet’s pieces invite us to participate in their process, and then when we do so, pressing buttons that activate multiple neon lights usually forming some kind of right angle compositions, we are given the illusion of full control of the speed of their blinking, and apparently the patterns they make.  I found myself energetically turning the lights on and off, watching the patterns to the point of dizziness and disorientation. And as if this were not enough in itself, what then makes Morellet’s work unique is that, at heart, it has all the seriousness and intellectual profundity of various touchstones in the history of twentieth century art. And so here is a corpus of work that pushes us to physical extremes, while all the time being appealing to the eye, and challenging to the mind.”

Morellet’s latest exhibition DASH DASH DASH is currently on show at Berlin’s Blain|Southern until the 1st of August. 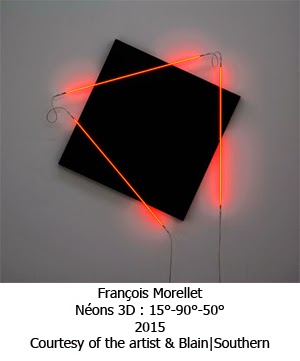