The Gesture in Painting 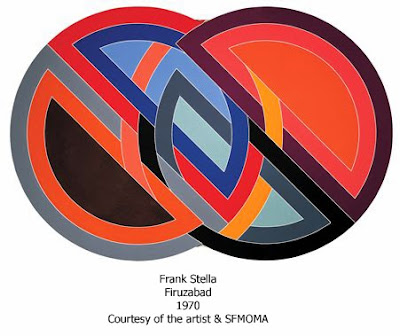 “It was the loss of the palette, not of the easel,
that changed the face of what we see as painting.”
Frank Stella

Although famed for his quote “What you see is what you see” there is more to the art of painting than what engages the eye according to American abstract painter Frank Stella. As he told Bomb Magazine’s Saul Ostrow, “No art is any good unless you can feel how it’s put together. By and large it’s the eye, the hand and if it’s any good, you feel the body. Most of the best stuff seems to be a complete gesture, the totality of the artist’s body; you can really lean on it.”

And so it was with the first of the Black Paintings that were to make the Stella name. He was in his early 20’s and recently resident in New York, attracted by the cream of the abstract expressionists in the late 1950’s whose style had him in their thrall.

As he told the London’s Telegraph Newspaper’s Alastair Sooke “I was working on a particular painting, (called Delta), and I remember I got mad at it. So I painted over it, and went to bed. When I looked at it the next day, it didn't look that bad. All I'd done was simplify it by painting out the bands all black. But something was happening. It had a kind of presence. That was the beginning.”

A year later Stella had a series of these “large, aggressive canvases covered with stripes of black enamel paint that formed repetitive, rippling patterns.” Of which four were included the Museum of Modern Art’s 1959 exhibition Important Sixteen Americans.

Over the ensuing decades Stella’s stripes gave way to complex geometric designs, shaped canvases and works on aluminium to sculptures of architectural size. Along the way he has maintained that early gained recognition with exhibitions in prestigious galleries and museums and prices to match.

But it is the gesture within the painting that intrigues and goes a long way in determining its value as art for Stella. As the New York Times reported his saying during his Harvard University’s Charles Eliot Norton lecturer “The life of what one drops the brush into counts for more than the size of what one paints on. The load of paint carried, more than the dimensions of the area to be covered, determines the scale of the gesture.”

An exhibition of his work Frank Stella – Paintings & Drawings is currently on show at The Kunstmuseum Basel until the 30th of August.