A trip to the Dentist

Visits to the dentist are not high on my favourites to do list, but there comes a time in the affairs of man when one must bite the bullet, so to speak. One must submit to a stranger poking about in your gob with sharp metal objects.

Being a stranger in a foreign land hit home with the force of Novocain but without the numbing effects. Finding a dentist with English equal to mine was the first priority as my Tagalog is konti lang (very little) and definitely not up to and in depth discussions about teeth. 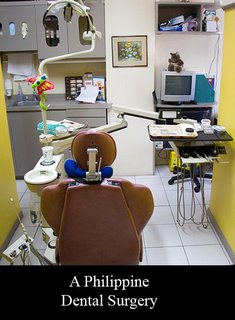 A flick through the yellow pages revealed a list of practitioners which at just over one page isn’t a lot, considering the population of Manila. A walk round any barangay would indicate that a yellow page’s listing isn’t a high advertising priority for the followers of St Apollonia.

The first call was answered by a gruff voice of the dentist himself who informed that he was there when asked about an appointment, mmmm didn’t instill confidence. The second call revealed that the receptionist didn’t know when the dentist would be available. A third call and pay dirt was hit with an appointment for later in the day being arranged.

I will spare you, gentle reader, the graphic details but this was, for me, a unique experience. Not only was it professional and painless but this dentist had a chair side manner second to none. Unlike other dentists he not only explained what he was doing but found time to relate as a person. We chatted about our mutual interests of art and red wine. There was a person behind the mask.

That the cost of the treatment was about an eighth for the same in Australia was a very pleasant surprise on which to leave.
Posted by Henry Bateman

Hi. I really need to go to a dentist but I admit that I am dead nervous and very afraid when it comes to visiting a dentist. I read that your dental visit was painless. Was it a regular check-up and cleaning? Tooth filling? Extraction? I need all of the above but I sure don't want to undergo the so called dental torture and pain. May I know the office of this dentist and his contact number? Thanks a lot.

Bart it was all of the above. I had an extraction, 2 fillings and a clean. All up cost of 1050php or there abouts and not a twinge of pain even after the anesthetic wore off. It is a husband and wife team situated at 397 JP Rizal Makati City tel 896 4673. I share your concern, dentists are not high on my fun list but these guys are good.
Good luck
Henry
BTW this is what this blog is all about. If we expats can help each other, well that is a good thing. If you have relevent info that can ease our path though this wonderful country, Share it. If nowhere else then here. Post a reply and I will happily turn it into a topic.

Hi. It is only now that I read your comment. Thanks a lot for the info. Um, I'm not an expat, I'm a true brown Pinoy looking for a painless visit to the dentist. Thanks again. If you have any questions, just ask and I would be very much willing to help. Email: tataybrat@yahoo.com
I hope you enjoy your stay in our mis-understood yet beautiful country. Good luck!

When I was young, my mom always told me not to be scared of my hygienist 'coz they are not monsters. And now that I have kids, I keep on telling them to visit their dentists regularly so they can have a healthy smile like their mom. =)

Visits to the dentist are not high on my favorites to do list too! But I'm so thankful to my Dentist Makati for a wonderful experience handling my dental needs.