F is for Family

A few days ago Pinsan (cousin) Neil visited the house. He is the driver for the undersecretary of the Presidential Legislation and Liaison office. His boss was attending the local court, which is at the end of our street, and he had a couple of hours to kill.

Neil is my asawa’s uncle’s son on her mother’s side and they hadn’t seen each other for a couple of years. Lots of chatting and catching up ensued interspersed with coffee and cake. The recent Kano addition to the family was also checked out.

A few months earlier his father's brother, uncle Papa Bobby, had installed our new kitchen sink. No doubt when we get round to the renovations up stairs he will be a front runner for the job.

My stepson, Paolo, is studying a Hospitality and Restaurant course at the University of Santo Thomas. One of the requirements of the course is on the job experience of six weeks in each area. His uncle in law, Tito Leo, a supervisor in the concierge department of The Manila Peninsular Hotel, was instrumental in him getting a foot in the door for the hospitality experience. Paolo’s good work saw his on the job experience extended for his restaurant requirement. Having one of Manila’s premier five star hotels on his resume will do him no harm when he starts looking for paid employment at the end of his studies.

When I married into my Filipino family, my family went from seven, one sibling and assorted children, to thirty eight counting siblings and kids and a hundred and forty four if the extended family is included. This clan that consists of four generations does look after its own, be it with financial support when hard times hit to moral support for ventures undertaken.

The flow of money between siblings, when financial emergencies hit, is common place. The amounts are usually small to top up savings for a larger than expected expense. From my experience it has always been repaid, if not in cash then definitely in kind. 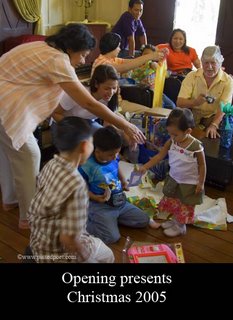 At major gatherings such as Christmas when all the immediate family comes together, the interaction between the generations is one of total acceptance. The sharing of others’ fortune is genuine with adult eyes being as bright as any ten year olds when the Chrissie presents are opened. Like the forty something fellow of the University of the Philippines showing to all who would look his newly received gift.

Very unlike similar Aussie gatherings where past insults and slights are dragged up for one more airing. Fortunately this cynical Aussie outlook has had an injection of optimism that it seems is irreversible.
Posted by Henry Bateman

Found your site through Jayred's. Your entries are very interesting. I will come back to read the rest.

And yes, we Filipinos are very family oriented.

If the universe did start with a bang - when God loved and the angels sang - one of the sparks that flew - chased time to become you :) xaNax

Thanks for your comments niceheart & sally w. Jayerd's site is well worth the effort to read. Trust you will find my musings as interesting.