The lingua franca of the Philippine judicial system is English. The proceedings are conducted in English and the judgments are written and delivered in it as well. Although English is widely spoken in the Philippines for the majority of the population it is a second language. Consequently each court has an interpreter for the local language.

I had occasion to attend a regional trial court when a female relative brought a case of sexual harassment against one of the professors at her college. As such it was a criminal case with the People of the Philippines versus the accused. The case was tried before a judge without a jury. I am reliably informed that there are no jury trials in the Philippines and the layout of the court confirms this as there is no place for a jury. 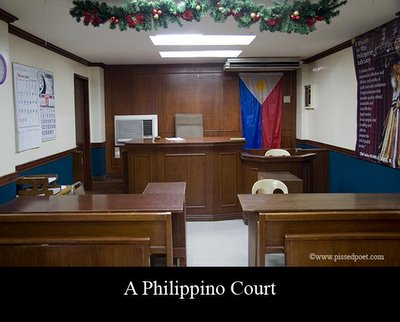 The judge was a woman in her late 50s who took no rubbish from anyone. She would scold a witness who was giving vague or evasive answers to counsel’s questions and would jump on a lawyer who strayed from the facts of the case. In her search for the truth of the case she would also direct questions to witness’.

During the latter part of the trial when it was obvious that the defendant was in deep doggie do after the prosecution had made mince meat of the defence witness'. His counsel drew the court's attention to the fact that the claimant, my niece, was sitting next to a Kano, me. The judge landed on that counsel from about six hundred feet admonishing him to stick to the facts of the case and to desist from making such innuendos in her court.

On two of the three occasions I attended the trial, the proceedings started late. For two hours on the first occasion and for an hour on the other we awaited for the judge to arrive. The trail itself was a drawn out affair mainly due to the defense not turning up or being ill prepared. It took three attempts to deliver the judgment.

Neither the defendant nor his counsel attended any of the judgment sittings. The defendant had moved residence and not informed the court of his new address. The notification to his counsel was sent by mail and its delivery couldn’t be confirmed. At the second judgment sitting of the court it was determined that notice should be served on the defendant’s counsel in person. The cost of serving the notice was to be bourn by the claimant, my niece.

The judgment was eventually delivered in the defendant’s absence. He was found guilty beyond reasonable doubt and sentenced to four months jail, fined 10,000 pesos and ordered to pay 40,000 pesos in damages to the claimant. A warrant for his arrest was also issued.

It was a month short of two years from the committing of the offense for the judgment to be delivered. It was good result for my niece and the professor, if he can be found, will no doubt rue the day he tried to take advantage of a pretty student.
Posted by Henry Bateman