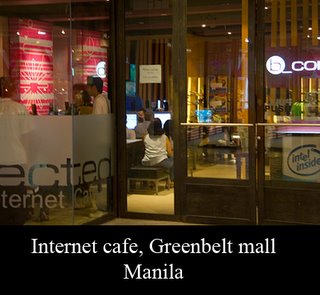 Due to the initial start up costs of entering the super highway being in the order of 20,000 pesos plus running costs, a very significant proportion of the population get their IT fix at Internet Cafes. To say there is an internet café on every street corner is over kill but only just.

Within 5 minutes walk from the house I know of 3 such cafes, if that walk is extended to 10 minutes there are about 15. Once when walking through a shopping mall in Cubao, I came across 8 cafes in a 50 metre stretch of the mall. They all seemed to be doing pretty good business considering it was 10 in the morning.

From playing the latest games the internet can provide to chatting and making friends with people on the other side of the world they have a steady stream of customers. Costing between 20 and 60 pesos an hour, all strata’s of society can afford to indulge.

The Filipino’s acceptance of the outside world and their willingness to become involved with it as evidenced by the popularity of OFW participation no doubt fuels these café’s demand. If it comes from overseas, especially America, it must be better than the local equivalent. 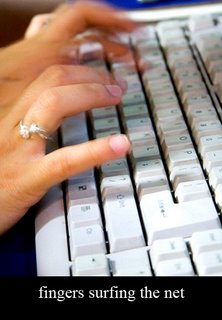 There is a significant number of Filipinos using internet cafes to search for a mate from overseas. The benefits from such a successful liaison are too great to be ignored. Apart from the material benefits for themselves and their families there is the perception of a more liberal acceptance that an affluent and compassionate lifestyle can give.

As a Filipino friend in Australia once remarked, “You won’t see any Filipino boat people, we’re smarter than that, we come into the country on the arm of a national.” If his words are true, internet cafes will no doubt be in the fore front of this migration.
Posted by Henry Bateman