A Stroll in the Park

Stretching between TAFT Ave and on its Manila Bay side, Bonifacio Drive is J P Rizal Park. A garden style park, it is a lasting monument to the Philippine national hero Dr Jose P Rizal. 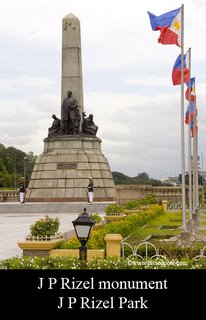 This good doctor was not only a physician but also a man of letters. It was through his writing that attacked the excesses of the church, championed Filipino rights and earned himself the ire of the authorities. Perhaps his greatest crime was coming from a privileged background and exposing their questionable claim to legitimacy. Like India’s Gandhi he was a man of peace and throughout his writing he propounded the futility of armed rebellion. The irony was that in the late 19th century when armed rebellion against the Spanish erupted, he was arrested as the principal ring leader. The Spanish ensured his reputation by martyring him in 1896.

The two monuments to him are at the TAFT Ave end of this long narrow park. An obelisk some 50 feet high complete with two armed military guards on duty and a remembrance wall at the place he was executed.

The long sides of Rizal Park are flanked with various smaller gardens. Amongst the more notable are Kanlungan ng Sining, The Artists Haven, the Chinese Garden and the Japanese Garden. 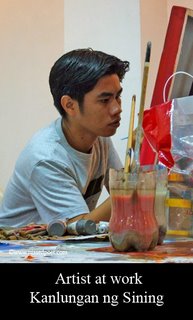 Kanlungan ng Sining is a delightfully shady over grown garden. Dotted amidst its lush topical greenery are an eclectic array of sculptures that range from the whimsical to the reflective. The sounds of the bustling city never seem to intrude. To the rear of the garden is a pavilion housing two dimensional works and often a working artist or two.

On the other side of the Park are the Chinese and Japanese gardens. The Japanese garden is austere under the glare of the tropical sun. As you stand on the bridge across its man made pond, the hum of the traffic and the city can be clearly heard. 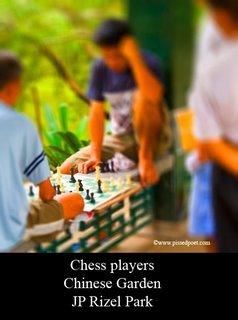 A hundred or so meters away is the more contemplative Chinese Garden. A pagoda type walkway skirts one edge of its pond and its denser foliage seems to keep the hustle and bustle of the city at bay. Here you will see lovers strolling, chess players doing battle, groups relaxing in idle conversation or singles with a newspaper.

The park itself is flanked by two suburbs that reflect the country’s history. On the Makati City, the central business district, side is Ermita which is also home to the US embassy. Ermita was until the early 1990’s one of South East Asia’s more infamous flesh pots. The red light district was cleaned up on the grounds that it was immoral although the rumours of conflicting business interests have never been proven. Be that as it may, in the noughties, the area is slowly returning to its former glory. 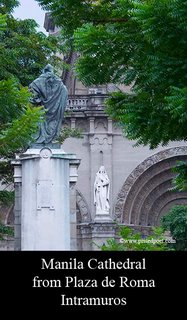 On Rizal Park’s other flank is Intramuros. A walled city established in the late 16th Century which was home to the Spanish administration until the Americans took over at the end of the 19th Century. The moat protecting the walls, which remain today, has been filled in and subsequently turned into a golf course. These walls surround the refurbished gentile grace of a bygone era along with a host of churches including Manila Cathedral which has been rebuilt six times.

As you stroll the boulevards of Rizal Park, the opportunity to grab a snack, a trinket or keep body fluids at optimum levels will never be very far away. Perhaps every 20 meters there will be a small stall of some description. This is the Philippines.
Posted by Henry Bateman

Your musings bring back many memories of wandering through Rizal Park..esp on a Sunday - when everyone was out and about.

People dressed in their 'Sunday best', families; young Mastiso couples - supervised of course !; Yaya's pushing prams and kids behind the strolling parents; picnics being eaten; music and song being part of it all.

This in the period of Cardinal Sin, when people erupted out of Church full of Sunday fervour and goodwill.

Thanks for your comments megan. Yes Rizal Park is a lovely spot, an escape from the ever busy Manila. Do love the name of the recently departed head of the catholic church, only in the Philippines di ba.