A State of Emergency

Philippine president, Gloria Arroyo, declared a state of emergency yesterday, banning public rallies on the 20th anniversary of People Power 1 which saw the end of the Marcos regime. She also decreed that all educational institutions close for the day giving school kids a day off. It seems that an army general and an equivalent ranked policeman were arrested for planning a coup and several other offices, up to ten in number, are being sought.

It is a very good bet that Gloria knows a bit more about the workings of people power than your humble scribe. She came to power in January 2002 through the auspices of People Power 2. The president at the time, Joseph Estrada, having escaped impeachment by congress through his mates in the senate was kicked out when the military sided with the people’s massed demonstrations at the people power shrine. That Gloria is feeling a tad nervous must be a given. In September last year she escaped impeachment, on a technicality, herself.

The state of emergency didn’t stop five thousand Filipinos gathering at the People Power shire on the EDSA despite the rally permits being revoked. Around noon the police, with the aid of a water canon, dispersed the demonstrators with some twenty two being arrested. 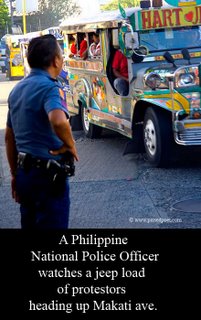 Throughout the afternoon a steady throng of people on foot and in jeepneys headed up Makati Avenue to Ayala Avenue. In all, ten thousand people gathered at the Aquino monument in Ayala Avenue in Makati City. They were addressed by Corrie Aquino, the ex president who came to power through the first people power. 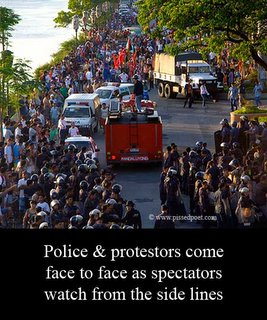 In Mandaluyong, on the other side of the Pasig River to Makati, the EDSA protesters were halted by the police from crossing the river to join the Ayala gathering. This was a peaceful affair with spectators out numbering police and protestors by at least three to one. After confronting each other for about an hour the protestors decided discretion was the better path than valour and returned to whence they came. 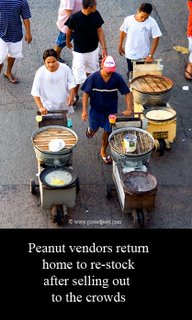 A walk home through the barangay after watching this confrontation it all seemed a world away. Kids were playing on the streets, enjoying their pupil free day. Older folks were going about the daily business and street vendors were headed home to stock up their supplies after a successful sell out to the crowds that were now dispersing.
Posted by Henry Bateman

try to spell it right in your headline

Thanks anonymouse all fixed up.

Hi, a nice blog you have here. You will surely get an bookmark :) Fleshlight

Seems like the street vendors were the winners here. :-)

What's happening to my country? I'm bothered about the news I see on CNN.