There is Cash in them there Islands

There are over 2000 banks in metro Manila. That is bricks and mortar buildings that provide the full range of banking services to their customers operated by some 40 brands. 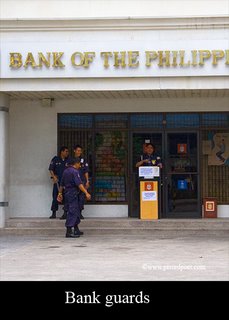 As would be expected in the 21st Century, they are interconnected electronically with ATMs being the preferred method of getting your hands on your cash. BPI, Bank of the Philippine Islands, who claim to have 3000 ATMs nation wide, charge a 100 peso fee for withdrawals over the counter that could have been made from an ATM. If your withdrawal is greater than can be handled by the machine there is no fee, but if not this rule is strictly adhered too.

For Christmas we required a supply of 20 peso notes for gifts for the small fry of which there are a considerable number. The teller informed us that although the machine doesn’t supply 20 peso bills to do the transaction over the counter would attract the fee. We went outside withdrew the money from the machine, took it back inside where the teller happily changed it into the required denominations free of charge. 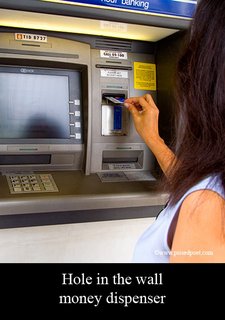 As with ATMs the world over, there are limitations on just how much cash a hole in the wall will allow you to stuff in your wallet at one time or in one day. BPI has a 20,000 peso limit per transaction with a 50,000 peso limit per day. The Philippine National Bank limits its ATM transactions to 4000 pesos per hit.

The machines will also pay out on major foreign banks with Cirrus endorsed MasterCard’s being happily accepted. But be aware, your bank will charge you a fee for a foreign transaction.

Not only do the banks have a hole in the wall but the machines can be found in numerous other locations, especially shopping malls. Any self respecting mall will have a section devoted to the machines and the larger malls will have several. Hotels, most consumer goods shops and supermarkets will accept plastic but you will get a better price for cash in shops where there is the opportunity to negotiate. Smaller shops like sari sari stores and market stalls are cash only and the real bargains are definitely cash only.

Although bank ATMs are on the street, if accessed during the banking hours of 9am to 3pm, the bank’s armed security will ensure you’re not hassled. Being a multi-lingual country your first choice for getting your hard earned will be transaction language, either English or the local dialect, which in Manila is Tagalog. The rest of the transaction will proceed along the lines of the usual human, machine interface we have come to know and love, especially when it spits out the lovely lolly at the end. 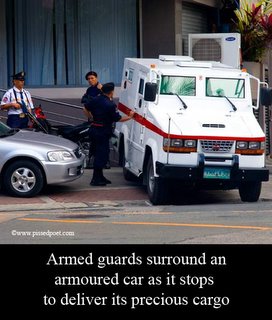 Should your stay warrant the opening of a local account, the procedure is relatively painless. As a Kano you will require your passport, your visa or immigration papers and a couple of passport size photographs. Half an hour with a bank official will sort out the paper work and your plastic access to your wealth will arrive in the mail 3 to 4 days later. A far cry from the 3 to 4 months that it takes for the government to issue plastic, but that is another post.

For a country that is on the bones of its bum economically, the banking sector seems to be in rude good health especially if the number of armoured cars ferrying valuables about is any indication. To go more than 10 minutes, during business hours, on a major thoroughfare without seeing one is a very long time.
Posted by Henry Bateman