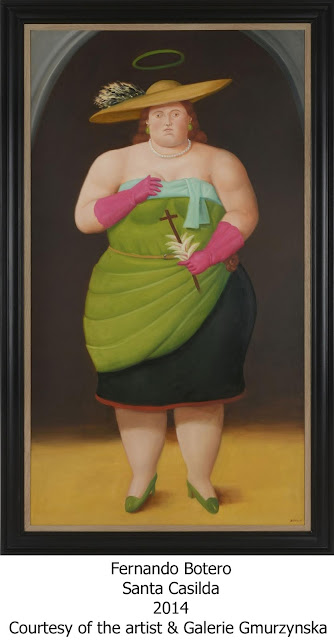 “I describe in a realistic form a nonrealistic Reality.”
Fernando Botero

The Columbian painter and sculptor Fernando Botero is best known for his depictions of large people that he insists are not fat. As he explained in a Reuters interview about his book Circus: Paintings and Works on Paper, "Well, in the circus there are, for example, fat women. In the circus one sees the difference between the fat woman and volumetric woman, which I do."

The inspiration for his depictions comes the 15th Century Italian Renaissance artists he discovered whilst living in Europe on his winnings from a national art prize in Colombia.

As he explained to ArtNews in a January 2013 interview, “One night, I was walking and passed a bookshop that had a book in the window on the Italian Renaissance by Lionello Venturi. The book was open to a reproduction of Piero della Francesca’s The Queen of Sheba Adoring the Holy Wood, one of the series of frescoes on The Legend of the True Cross in the Basilica of San Francesco in Arezzo, Italy. The frescoes opened my eyes, and Piero changed my life. I saw it and thought it was the most beautiful thing I had ever seen. I couldn’t believe it. I had never heard of Piero. The next day, I bought the book. That began my obsession with Italian art—the sensuality, the voluptuousness of the forms.”

Botero’s distinctive style which has almost become a trademark attracts its fair share of criticism. As Sotheby's Carmen Melián told Art in America, "Many people don't know his history and the political history that it springs from. Some of it's envy, some people don't like figuration, and some don't approve that it has mass appeal, rather than just intellectual appeal."

But Botero is unperturbed. “Some people love my work, some people hate it,” he has said. “You can’t be liked by everybody. There has been opposition in some places. I represent the opposite of what is happening in art today. But I don’t complain. It hasn’t hurt my career. I’m happy to have the success I have had.”

And whilst the majority of his work is of the familiar from time to time politically sensitive issues appear in his work such as his depictions in 2005 of the victims of the abuses at the Abu Ghraib  prison in Iraq.

Although now in his 80’s Botero still puts in a 10 hour day in the studio with his latest series of works a suite of portraits entitle “Santas.” About which the publicity states “For this body of work created in 2014, Botero has turned his attention to the iconic depictions of female saints from the Christian canon, reinterpreting one of the quintessential genres of Western art history through his unique style by which these revered unearthly heroines reemerge as distinctly worldly society ladies.”

The “santas” exhibition is currently on show at Zurich’s GalerieGmurzynska until the 31st of July. 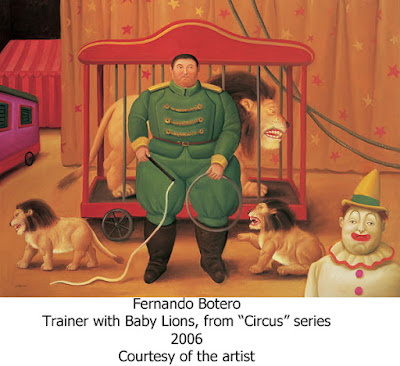