Of Monsters and Maidens 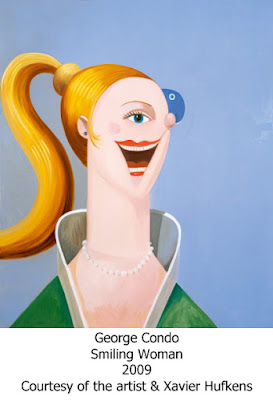 “Monsters are just as beautiful as maidens.”
George Condo

“Rembrandt on crack” is how the Financial Times Julie Belcove described the paintings of American figurative artist George Condo.

The artist himself is a little more circumspect stating “There not the kind of people you want to spend a lot of time staring at – they’re not on the covers of magazines. When you see a crowd of people coming out of a subway and one crabby old lady is elbowing some guy to get out of her way and some strange bickering starts to take place, those kind of expressions are far more interesting to me.”

Condo is renowned for his portraits of mostly very odd looking imaginary people. As he told Bomb Magazine “When you add them all up, it’s quite a crew: Indian chiefs, cavemen, office bosses, the nun, two-bit hustlers, low-life criminals, people with one tooth, one eye, protruding chins, enlarged facial features…Listen, if you grow up in New England, you see an old fisherman on the pier very differently from Norman Rockwell, who sees him as a stereotype, which is patronizing and condescending. There’s no sympathetic equality involved. I absolutely feel there’s no intrinsic difference between people. Somebody might say, “George, you’re completely full of shit. Fishermen and bums don’t live in apartments on Madison Avenue or in expensive hotels.” But I say this . . . “Yes, they do . . .”

For over 30 years Condo has been producing his Looney Tunes inspired renderings of Europe’s old masters. As he says “My painting is all about this interchangeability of languages in art, where one second you might feel the background has the shading and tonalities you would see in a Rembrandt portrait, but the subject is completely different and painted like some low-culture, transgressive mutation of a comic strip.”

Dissatisfied with New York art scene Condo spent a decade in Paris during the 1980’s and 90’s where he refined his art and met his wife. About which he tells the story “I stayed for a month at the Hotel Lotti and every day, when I came back to the room after lunch, the curtains would be drawn. I finally asked the maid, in my high-school French, why she did that. She pointed to my drawings and said, ‘Monsieur, le soleil n’est pas bon pour vos tableaux!’ (Sir, the sun is not good for your pictures) And I thought, this is the only place in the world where that could happen.”

His return to New York saw Condo continue to develop what he calls his “psychological cubism” which he described to London’s Time Out Magazine as being art that “wear[s] an expression that ‘goes between a scream and a smile; that reflects simultaneous emotions or conversations with the conflicting voices in your head.”

For as he told the Interview Magazine "The topographical aspects of the human face are frightening and when they resemble the average person, rather than a magazine cover, viewers recognize themselves..."

His latest exhibition George Condo: Works on Paper is on show at Brussels’ Xavier Hufkens gallery until the 11th of July. 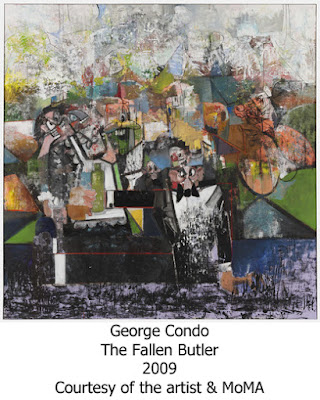