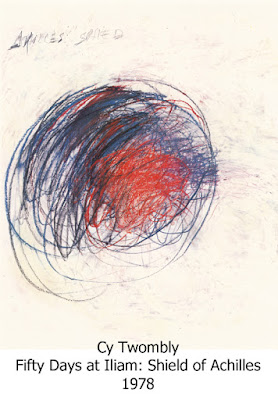 “I had my own freedom and that was nice.”
Cy Twombly

If there is one painter who could personify the “my child could do that” idea of painting Edwin Parker "Cy" Twombly is that painter. Although the Guardian Newspaper’s art critic Johnathan Jones said of him in 2004 “Cy Twombly is the last great American artist.”

Following in the footsteps of Jackson Pollock, Twombly builds with a language all his own upon the formers foundation, as Jones goes on to say “Twombly is a great painter not because he has "rebelled" against Pollock, but because he has understood him.”

And it is understanding that drives Twombly’s work along with the patience to reach that understanding. As he explained in Nicholas Serota’s History behind the thought interview “I'm not a professional painter, since I don't go to the studio and work nine to five like a lot of artists. When something hits me, or I see a painting, or when I see something in nature, it gives me a thing and I go for it. But I don't care if I don't go [into the studio] for three or four months. You know, when it comes it comes.”

Twombly went on to elaborate saying “I’m not a pure; I’m not an abstractionist completely. There has to be a history behind the thought ...I need, I like emphasis ...I like something to jumpstart me - usually a place or a literary reference or an event that took place, to start me off. To give me clarity or energy."

And it is a process that translates into the studio for many of his paintings, as he has said “I sit for two or three hours and then in fifteen minutes I can do a painting, but that's part of it. You have to get ready and decide to jump and do it; you build yourself up psychologically, and so painting has no time for brush. Brush is boring, you give it and all of a sudden it's dry, you have to go. Before you cut the thought, you know? You want to contain the thought.”

“I mean when it does come, it's natural. I don't force it, which would be in those periods when it's kind of barren. I like to work on several paintings simultaneously because you are not bound. You can go from one to another and if you get strength in one you can carry it to the other, they are not isolated… I always did about eight painting a year. Most were series so they were all around the studio and I was jumping from one to the next.”

In writing about Twombly’s 2004 exhibition at London’s Serpentine Gallery, Jones said “Cy Twombly's paintings are grand histories whose louche drips, purple washes and bursts of poetic quotation written in paint or pencil on the canvas are abstract, and also tell a story. Of course, you can never quite fathom what the story is, but you are involved by it all the same, and moved by the scope of Twombly's emotional waterfalls of color. His art is tearful, sensual, pessimistic, and on the edge of bad taste. 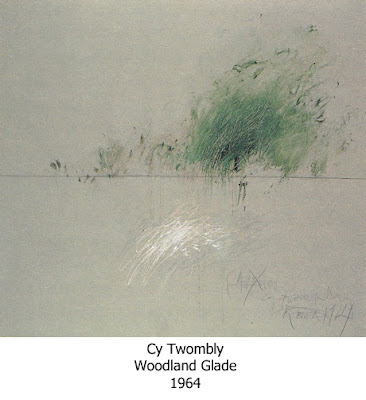