Drawing From An African Heritage 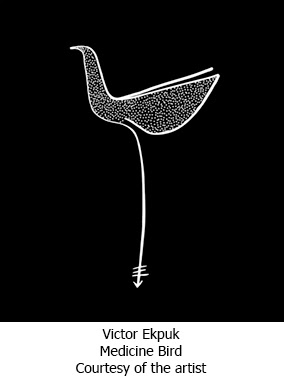 It is important to note that the artistic culture in Africa that informed and inspired the Modern movements in Europe are not extinct.
Victor Ekpuk

Although now an American citizen and living in his newly adopted country’s capital, the Nigerian born artist Victor Ekpuk still calls on his African roots for the production of his art.

As he told the Seeds and Fruit blog “Though my limited knowledge of nsibidi signs today is from memory of observations and documented anthropological archives, what I understand has immensely inspired the direction my work has taken for the past two decades that I have been a professional visual artist. My contact with nsibidi has inspired me to use the essence of this ancient art form to express my contemporary experience.”

For Ekpuk making art with an emphasis on drawing has been his lifelong passion. As he has said “As far back as I can remember, I could draw good resemblances of objects and people before I learned how to write. I would say that my mother was the first nurturer of my artistic gift. At a very young age, she encouraged me to enter competitions. So strong was my love for art that I could not think of anything else I’d rather study in college, and my parents did not dissuade me from this path.”

The inclusion of the nsibidi symbols into his work also has a personal connection. As he says “Nsi­bidi is an ancient form of writ­ing that uses sym­bols to rep­re­sent con­cepts. It is prac­ticed in Nige­ria and West Africa and it is still in use today actu­ally. So when I started look­ing for form to express my con­cep­tual ideas I started doing research into tra­di­tional African art and aes­thet­ics and that really attracted me.  It’s also from the part of the coun­try that I’m from. My fore­fa­thers were doing this so that made it kind of per­sonal to me.”

With residencies in Santa Fe and Amsterdam and most recently at Dartmouth’s Hood Museum of Art Ekpuk produces work that reflects his socio-political experiences of the world. As he explained to TSV’s Liz Georges ““I like to go through the whole spec­trum of human con­di­tion, social, polit­i­cal. There was a time when I was liv­ing in Nige­ria when my work was very polit­i­cal because I was liv­ing under a very polit­i­cally tense atmos­phere, we had a dic­ta­tor­ship for a very long time. So hav­ing lived here for some time, a lot of my Amer­i­can expe­ri­ence is com­ing into my work as well, social com­men­taries. And some­times if the pol­i­tics get too heavy I just like to explore the aes­thet­ics of form. I like doing that as well.”

Ekpuk’s current exhibition Auto-Graphics which includes a wall drawing he made during its first week is on show at the Hood Museum of Art until the 2nd of August. 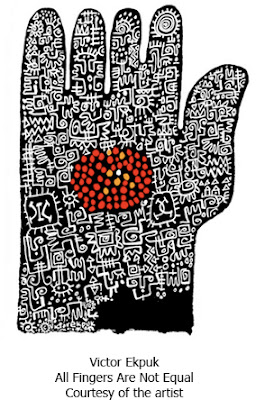 The shape is simple and the content, with the thoughts it sets off, very complex. Powerful, Neat and Succinct.