The Beauty in Mathematics 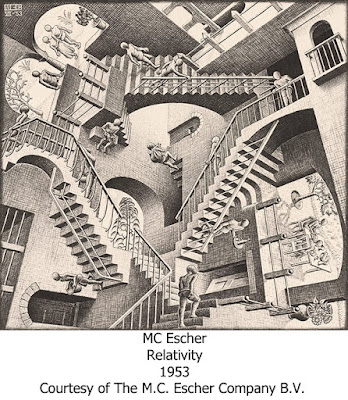 “I consider myself more of a mathematician than an artist.”
M. C. Escher

The Dutch graphic artist M. C. (Maurits Cornelis) Escher was recently described by the Scottish National Gallery of Modern Art’s senior curator Patrick Elliot as a "one-man art movement." And with reproductions of his works adorning adolescent bedroom walls too numerous to count Escher’s works have found favor with an audience that ranges from hippies to mathematicians.

Apart from posters, Escher’s impossible depictions have graced record album covers, biscuit tins and tea-towels with precise, illusionary, patterned and graphic works executed by a draftsman second to none. Whilst not a surrealist, Escher has managed to successfully portray a whimsically unique world of existential abnormalities.

As he told New York’s Metropolitan Mathematician’s Journal in 1948 “I first started doing graphic work in 1913, when I was 15 years old, but then I did simple black and white wood cuts. I gained recognition and was encouraged by my parents. I had gained a lot of fame and popularity for my complex lithographs (a complex system of printing) depicting worlds merging together by the time I began experimenting with regular divisions of the plane. I can date this back to around 1936. My first tessellations were based on old Arabic decorations, but I soon began to develop my own style. But it wasn’t until the mid 1940's that my technique had been perfected. It was a very gradual process, developed mostly by experimentation, because the complex mathematics of it escape me. I first mastered this technique with squares and rectangles, later moving on to triangles and finally hexagons and parallelograms. I am currently experimenting with irregular shapes (shapes with both positive and negative angles) that tessellate.”

Like the honeycomb in nature or the repetition in Islamic art that inspired Escher’s development of his art, tessellation has been a major ingredient in the themes that inform his art.

As he has explained “There are four [themes/styles] that are my most popular. Firstly, I have always been interested in portraying the illusion of three dimensionality onto a two dimensional surface, in other words, making something on a sheet of paper look round. Secondly, I am very famous for another kind of illusion. I make images (again using the illusion of three dimensionality) that cannot really exist. They can only be drawn on a flat surface, this is because a flat surface is not really three dimensional and does not have to follow the laws of reality. Thirdly, I express transformations in reality. I often do this by having a mirror in my picture reflect a scene that does not fit at all. Sometimes I make subtle changes to my picture that by the other side makes it completely different, a flock of birds changes into a city scape. In this style I often use tessellating figures gradually shifted to become something else. This brings me to my fourth and by far favorite style, regular divisions of the plane or tessellations. This is when a plane (or a section) of one represented by a sheet of paper is divided over its entire area by a regularly recurring series of lines. These must divide the plane into discernable shapes that repeat throughout its entirety. Or to put it in simple terms, a giant jigsaw puzzle in which all of the pieces are the same. Ever since I began experimenting with regular divisions of the plane, it has been my favorite thing to draw.

And underpinning Escher work is the creation of beautiful pictures. As he has said “I do my art because I think it is beautiful. That is what I believe art should be, a thing of beauty.”

The beauty in his work can be seen at The Amazing World of M. C. Escher currently on show at the Scottish National Gallery of Modern Art until the 27th of September. 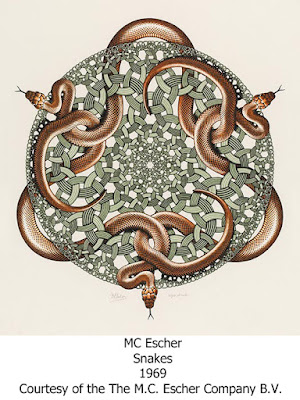