Like a locust plague swarming, the air in the Philippines is full of text messages. Little bits of misspelled text sent from one cell phone to another, usually one thought at a time. 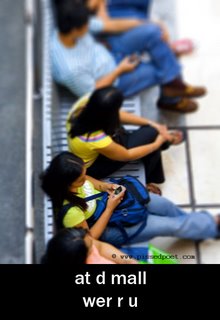 Cell phones are an epidemic here. Leave that box empty on any sort of official or semi official form and it will be handed back to you. An explanation that you don’t have one is met with a look of wonder and disbelief. A reiteration that you are a cell phone free zone is greeted with a shake of the head and a “sobra kakaiba (bloody strange) Kano” look.

With the introduction of texting at around 1 peso (AU$0.02) a message to send and nothing to receive, everyone can afford it. And making the most of it is becoming the new national sport. To the extent that there was a news report a couple of days ago saying that school children were skipping lunch to make sure they could afford a load.

The majority of cell phones are pre-paid and you can load your phone for as little as 30 pesos (AU$0.78). But 30 pesos will also buy you lunch and the thought that Filipinos are giving up food to text is a major change in mind set, even if they are kids. This is a country where eating is the national sport with six designated meals a day.

Where ever you are there will be some one texting within sight. At the train station, in the mall, even in church. I saw a woman texting during a christening. Begs the question, does God have one too?
Posted by Henry Bateman

You made a very good observation. Filipinos, in general, are so text-crazy that it already defies logic.

I'm a Filipino, but I'm one of those who can live without a cell phone. As a matter of fact, I just gave up my Orange SIM card this month. I'll go for the cheaper prepaid SIM pack. I text people only when needed (i.e. rendez-vous or emergency calls).

What truely amazes me is the people who can text without looking at the key pad. Who would have thought of text entry by thumb a decade ago. Thanks for dropping by.