Room for One More IV

It is a truism, which I can vouch for from direct observation, that tricycle drivers know the longest way between any two points. These motorcycles with their covered side cars carry their passengers from door to door within and to neighbouring barangays.

Restricted from using the main thoroughfares, they wend their way through the back streets negotiating the speed humps along the way. With their human cargo on board, along with whatever goods and chattels are deemed necessary for the journey, they chug their way through the narrow streets that are old Manila.

Made before the motor car and if one is parked in any of these streets, the remaining space is just wide enough for one tricycle at a time. With two way traffic plying these lane ways, there is a politeness, bourn out of necessity, displayed by tricycle drivers as they pull over to one side to allow an oncoming vehicle right of passage.

Although when the time comes to cross a main street, as it does in all trike rides, they are as aggressive as any other Manila driver. Demanding their right of way irrespective of the passengers’, folded into the side car, concerns for the bull bar bearing down upon them.

A tricycle can accommodate 3 Kanos, the 2 smaller ones in the side car and the large one on the seat behind the driver, and up to a football team of Filipinos. They usually have a fold down carry rack at the back of the side car for extra passengers to stand on or to carry those purchases that won’t fit around the passenger’s feet or on their laps. When we bought a new washing machine we transported it to the house tied onto a trike’s carry rack. As we accelerated after each speed hump I was sure we were going to flip backwards. 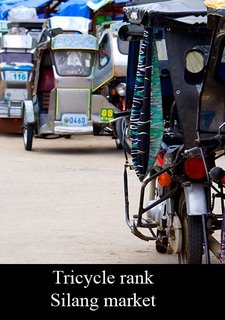 Tricycle bayads (fares) are best negotiated up front and range from 20 to 50 pesos (AU$0.50 to $1.25) per trip depending upon the distance to be traveled and what the driver thinks he can get. Fortunately at popular pick up points like markets, supermarkets, suburban malls and train stations and bus terminals there are a surfeit of trikes thus keeping bayads competitive.
That being said there are some routes, especially in the provinces where tricycles tend to replace jeepneys as the main form of public transport, where they charge on a per head basis. In this instance you will share your trike with strangers and you should expect to wait until there is a full load before heading off. 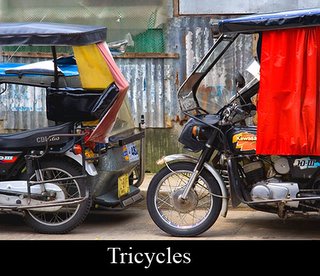 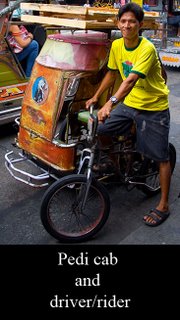 In the city of Mandaluyong there is a breed of red tricycle which has its passenger compartment behind the driver rather that at his side. These trikes can accommodate up to 6 average adults with only a slight squeeze and also charge on the per head basis. Although the impatient Kano can pay the fare of 6, at around 45 pesos (AU$1.20), and have it all to them self.

A quieter version of the tricycle is the Pedi cab. These are usually a BMX style of push bike with a passenger side car attachment. The laboured breathing of the driver as he stands up to peddle from a standing start with a couple of passengers on board is easily drowned out by the sounds of the street. Pedi cabs are the short haul public transport option operating within the confines of a barangay.

They are not as wide spread as tricycles which at last count numbered 9000 registered and any one’s guess as to how many unregistered in metro Manila alone. The Pedi cabs close cousin the BMX bike with a goods side car can be seen everywhere. These work horses can be seen delivering anything and everything. From, furniture to gas bottles to house holders and crates of cool drinks to blocks of ice to the omnipresent sari sari stores.

After jeepneys, tricycles are my preferred mode of transport they are just so much more fun than a taxi. My favourite tricycle ride to date was just a couple of weeks ago. Half way through the journey our noble steed stalled. A couple of kicks displayed a distinct reluctance for forward motion. Unfazed, our driver hopped off and requested my asawa and I to vacate the side car. He then tipped the trike backwards so the front wheel was in the air, gave it a shake and thumped the petrol tank a couple of times. Once back on all 3 wheels it sprang into life again and we continued uneventfully to the conclusion of our journey.

There is always room for one more trip in a tricycle tank.
Posted by Henry Bateman

PHP20 to PHP50 for a tricycle ride?! I guess that's the special rate in Makati?

But then again, my sister told me that commuter fares have really gone up in RP.

Jeepney rides have just recently increased to 7.5 pasos for a short ride. I guess the trikes are just following their lead. I guess it is understandable when one considers petrol price hikes.