I have survived my first Christmas in the Philippines, so much food, so many relatives, so much good cheer, and so much noise at night.

Ok, I live in Makati which isn’t the quietest place at the best of times, but this was amazing. I never imagined there could be so many different bangs from fireworks. From the small arms rattle of the Multiple Banger to the deep throated roar of the PVC canons.

It started about a week before Christmas and built up to an all out assault on the city on NYE and even last night, 6 nights after the event, there were still small skirmishes happening.

If you ever intended to sleep through the New Year, forget it, this is the sound effects for any number of war films and there is no volume control. Steven Spielberg could have sent a sound recordist here for New Years Eve and had enough sound effects for six openings of Saving Private Ryan.

The Multiple Banger is a long, thick sparkler-like firework that when ignited produces a fast series of forty sharp bangs and a very impressive shower of sparks that lasts for about 45 seconds. My brother-in-law let one off in the house, we had to shout for the next 15 minutes to hear each other and his wife’s concern for the soft furnishings was not unrealistic. 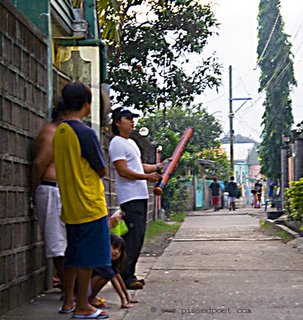 The PVC canon has replaced its bamboo predecessor, but is operated in the same manner. A length of PCV pipe has raw alcohol spayed into it which is then ignited and boom. The diameter of the pipe determines the timber of the bang with a one inch pipe resembling small arms fire and a 4 inch pipe sounding like heavy assault artillery.

These canons are available commercially for around 300 pesos (AU$7.90) at Divisoria. (A Manila market that rightly deserves a retail therapy of its own.) The alcohol is readily available from any number of hardware stores.

Will I get into the swing of things and purchase my own canon for the end of 2006? Unlikely, I prefer a slight buzz and a silly grin from my alcohol rather than hearing loss for a few days.
Posted by Henry Bateman

That's what makes xmas in the philippines very unique and worth experiencing. Getting some sleep it's still possible at least for my family, drinking enough alcohol is the answer.

Nice entry about philippines btw.Keep it up and enjoy your stay there.