Room for One More 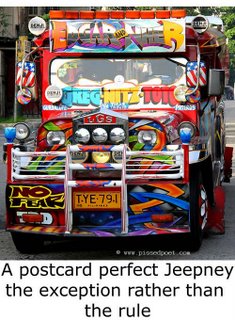 The Philippines is renowned for its multi-coloured, highly decorated jeepneys. But after about 10 minutes in the country, you realize that these are the exception. Officially referred to as PUJs, the majority are drab utilitarian vehicles with route details as their major decoration and more often than not belching black smoke.

That being said, they are the back bone of the public transport system as they career down major thoroughfares and side streets playing tag with each other. The first jeep gets the passengers.

Holding on average up to 20 passengers, 2 up front next to the driver and 18 in the back seated on benches running down the sides. It is not uncommon to see an extra body on the outside hanging onto the back waiting for someone to alight so they can move inside. Although those passengers tend to be young and male.

Jeeps stop and start at their passenger’s whim, apart from their start points, where they will sit until they have a full load. There are no designated stops, to get off you shout “para” or knock on the roof or both. To hail a jeep, you need to attract the driver’s attention. 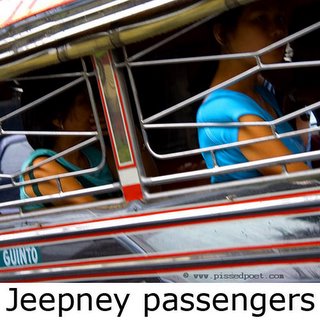 This is easier than one might expect considering the traffic, which in Manila, like all big cities, is chaotic. Jeepney drivers drive with one eye on the traffic and the other searching for customers. Make eye contact and nod or stretch out your arm, palm down and close your fingers and your ride will stop. With luck it will have pulled over to the side of the road if not thread your way through the traffic and climb aboard.

Watch your head! You will be shuffling along inside the jeep bent at right angles to a vacant bit of bench and it’s a good idea to hang onto the hand rail on the roof. If there is a gap in the traffic before you’ve found your bit of bench, the driver will be heading for it. Also be aware of your fellow passenger’s toes, if you inadvertently do step on someone’s toes a smile and saying “ay sorry” should avert any serious recriminations.

The standard bayad (fare) for a jeepney is 7.5 pesos (AU$0.20) although if you are going for a long ride, more than 4.5 kms, expect to pay an extra 50 centavos (AU$0.01) per kilometer. Pass your money down the jeep saying “bayad” along with a recognizable land mark near your destination. Your fellow passengers will pass the money to the driver whose hand will appear above his shoulder to accept it. Like wise your change will be passed back the same way. 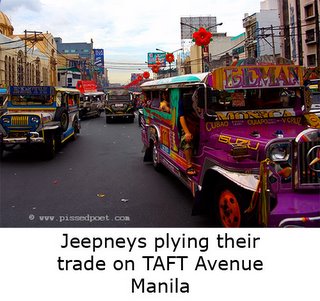 Now, not only is your driver negotiating Manila traffic, scanning for customers, he is also making change. The majority of jeepney drivers are very competent if somewhat erratic. I have often marveled at their ability to take their vehicles into spaces I was pretty sure they wouldn’t fit and to do so at speed.

If your Tagalog isn’t up to counting hand signals will suffice for the number of fares you want. Index finger for one; V symbol for two; middle, ring and little fingers for three; four fingers for four and add a thumb for five.

A sense of geography is handy but not a pre-requisite as jeepneys traverse a pretty much pre-determined route and as long as you know where you have come from you can catch one going back the way you came. There are literally dozens of them passing any given point most hours of the day. Ok, between 1 am and 5 am they do become a bit thin on the ground. That is when taxis come into their own, assuming of course that the driver wants to go where you do.

Jeepneys are a great way to explore the Philippines and get a sense of the place from the local’s perspective. They are the preferred means of local transport for the majority of the population and there is always room for one more, if not in this one, then in the one behind it.
Posted by Henry Bateman

Wow! Great article! You described it in a way, i think, no Filipino can! I also love the title :-)