Room for One More III 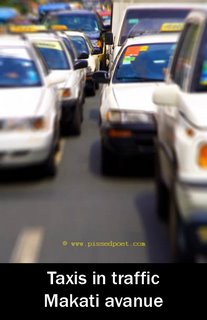 Taxis in the Philippines are pretty much like taxis anywhere. When you need one, there are none to be seen or they are all occupied, when you don’t need one, you are tripping over them.

Apart from the FX taxis which are basically up market jeepneys in that they squeeze 10 passengers into a space designed for 8 and ply a pre-determined route. They are the old style of what is known in Australia as Toorak Tractors, a high riding station wagon or estate car. They will stop anywhere along their route to drop you off and if they have room they will stop when hailed. It is best to sit in the back as only 4 people are expected to share a space designed for 4. The front seats will be a bit of a squeeze, 6 people in a space designed for 4 or maybe 5 small people. And trust me not all Filipinos are small.

FX’s proudly claim to be metered but I have yet to see the meter engaged, passengers pay a fare some 3 to 7 times higher than a jeepney (see the first 'Room for one more') depending on the distance traveled.. Like the jeepneys they will wait at their start point for a full load, although if you are prepared to pay the equivalent of 10 fares you can be the only passenger. A regular taxi will more than likely be cheaper.

Regular taxis are of the small Korean style of sedan with a capacity for 5 people, including the driver. This restriction is mostly observed although it can be waived if you can come up with the right inducement to tempt the driver. For some reason that escapes me, the window winders on the back doors are usually absent. My asawa (wife) does insist that the doors are locked when in a taxi and as her knowledge of things Filipino is much greater than mine, I offer this as a recommendation. 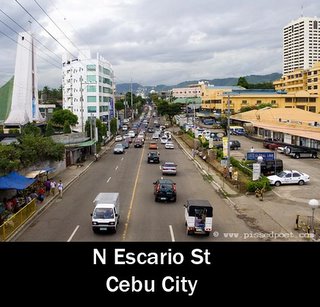 Like their counterparts the world over, Philippine taxi drivers know all the traffic jams and all the scenic routes between you and your destination.

When in Cebu, we caught a taxi at the entrance of the SM Mall, off we went into an excellent traffic jam. After sitting there for 10 minutes the driver did a U turn and we sped off to another, albeit smaller traffic jam, which we negotiated in about 5 minutes. After a right turn and as we passed our pick up point we hit our third traffic jam. The driver’s intention of turning left to look for another one when the road ahead looked like the traffic was moving was it. We decamped, it was not so much the 50 pesos (AU$1.30) on the meter that pissed me off, it was being played so obviously for a patsy.

The next day we hired Ricky and his cab for 5 hours to do some of the sights in and around Cebu for 1200 pesos (AU$31.50). After we shouted him lunch at the Blue Waters Resort, he couldn’t be more helpful. Took us to places off the beaten track that only local knowledge could provide. After a good 7 hours we waved a disappointed Ricky goodbye, he had other places he wanted to show us including the infamous Colon Street. We convinced him the red light district wasn’t our scene and after he had organized his co-driver to take us to the airport the next day he bid us a fond farewell. 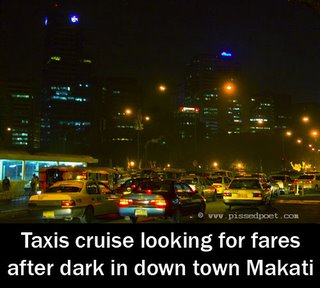 Taxis in the Philippines operate on a boundary system where the driver pays the owner a fixed fee to drive the taxi for 24 hours. The current boundary in Manila, I am led to believe, is 1450 pesos per 24 hours. After running expenses, which usually stretches to fuel only, the takings are the drivers. My brother-in-law drives for the full 24 hours and then takes the next day off. Other drivers share the cab with a co-driver and work 12 hours a piece.

Consequently, even though the taxis have meters, it is up to the driver how much they will actually charge.

We once got offered a bayad (fare) of 50 (AU$1.30) pesos with 130 (AU$3.40) showing on the meter. The driver didn’t go the way my asawa thought was the best/cheapest way. She gave him such a tongue lashing in Tagalog that when we arrived at our destination the driver said it was 50 pesos “kasi your girl friend thinks I trying to cheat you”. Being called my girl friend did mollify the asawa to a certain extent (after all she is the mother of a 20 year old son) and I felt sorry for the bloke, so I paid him the meter. But, I didn’t give him a tip, to have done so would have been sheer folly.

With the bayad being at the driver’s discretion, if you’re traveling between the Airport and Makati and the meter looks like it is going to pass 130 pesos it would be a good time to start discussing a negotiated fare. Even if the idea is rejected, as it most likely will be, it does tell the driver you are aware that you are being taken via the scenic route. Your alternative is to stop your ride there and catch another taxi, with flag fall being 30 pesos (AU$0.80) it could well be your cheaper option.
Posted by Henry Bateman

Henry, first of all thankyou for your kind invitation to view your writings about the taxi drivers of the Philippines.

Let's just come to the conclusion that these drivers are out to fleece you for what you have in your pocket. My god........they don't charge you what's on the meter !! If that stunt was attempted in good ole OZ, there would be a little bit of a barney I do believe.

In recent times I've only travelled in taxi's from Melbourne Airport to my home, in the northern suburbs, after an interstate holiday. The last occassion was an interesting affair indeed.

As my better half and I made ourselves comfortable in the palatial surroundings of a grotty canary colored Ford Falcon, the driver asks, "Where are you going ?"
I replied "To Glenroy."
He said, "What is the best way to get there ?"
I said, "In your cab I hope."

At this point he realised I was taking the piss out of him and he said, "Which street ?" I replied, "Melbourne Avenue."

He repeated, "What is the best way to get there ?"
I said, "Mate, do you live on this side of town ?" He replied, "Yes I live in Thomastown, but I don't know this area very well."

Well Henry, at this point I knew that if I didn't do the navigating for this newbie to the taxi game, I definitely would have been taken on a journey that probably would have lead to the meter running up to an amount that I would not be prepared to pay.

Many taxi drivers in Melbourne seem to have been recently recruited from foreign countries and they have no idea of the areas in which they are expected to travel........not even the faintest idea !!

Just recently a cabbie was involved in an accident at a cross intersection a stones throw from my place. He T-Boned a four wheel drive after driving straight through a STOP sign.

When we asked him later on if he'd seen the sign, he replied "No."

Henry, luckily on this occassion no-one was hurt in the accident, but it does make me wonder, what sort of an education are these cabbies receiving before they are given the keys to the canary colored six cylinder vehicles.

Henry, it's always a pleasure to view your social documentary style photographs on Passion For Pixels and thankyou for inviting me over to your place. Your contributions on the Passion For Pixels forums are most informative and it is people such as yourself who make that website an absolute pleasure to be part of.

Cheers to you from the land of OZ.

Thanks for your reply Darren. I recently heard of trike driver asking a Kano for 350 for a 50 pesos fare. The cops were called and basically said if that's his price that's what you gotta pay. The moral here is to decide the price up front.
A similar adventure to yours happened to us a few weeks ago. We were off to see a distant aunt who hadnt been visited for a few years in deepest Marikina. The asawa and her sister were unsure of how to get there, so we caught a taxi who's driver said, yep he knew Marikina. Well to cut a long stoey short when we he stopped at a service station to ask directions I knew we were in the doggie do. We eventually arrived with 160 on the clock. The return journey by FX cost 60. Methinks,ignorance ain't bliss for taxi drivers, it's a bloody good earner.

BTW if anyone is interested the Passion for Pixels that darren refers to in his post can be found here.