Finding and Following an Independent Path

“The beach has the power to shape everything it touches into its own image.”
Terry Setch

The British artist Terry Setch has been using the Welsh coast as the primary inspiration for his encaustic paintings for the majority of his career.

As he told fellow artist Michael Sandle in a 2010 conversation “the south Wales coastline became the source of my imagery and since 1971 all my work has been about what I could extract from the Seven Estuary; it’s only a few minutes’ walk away from my home in Penarth and after forty or so years I’m still here.”

Growing up in London during the Second World War his artistic ability was recognized in his early teens and he was encouraged to attend Saturday art classes at the Sutton School of art. Two years later he enrolled full time in the school where he was allowed to follow an independent path.

The beach became a second studio for Setch and the interaction between land, sea and humanity providing him with metaphors for contemporary political and social concerns, especially that of pollution.

As he explained “The issues about recycling and pollution surfaced when I started going to the beach. Cardiff was one of the most important ports in Britain so everything was industrially charged. I also started to feel in contact with the movement of the tides and the human activity going on; the discarded waste, some people’s inability to be in harmony with nature or to enjoy nature and not ruin it for other people. Rather than a piece of beautiful landscape it was more like a legacy of my London childhood: homelessness and bomb-sites, bits of people’s lives being lifted and spread across that landscape. The tides on that estuary are enormous and they gather in what’s left on the beach and plant it somewhere else. The moment I saw that happening I realized I could play a part. I could pick things up and I could place them somewhere else, which I did, and the tides would come in and knock them down and then I’d have to rediscover them. That was the start of it. My work has gone through many Changes since then but on the beach I found a system that I could build upon.”

And as Martin Holman quoted Setch as saying in an essay for Setch’s 2001 retrospective exhibition “I have always been trying to get things right from a personal angle. I have got to follow my own path: I am not a ‘joiner’ or part of an ‘ism’. I have tried to create an identity that is my own.”

Setch’s current exhibition Reduced to Rubble is on show at London’s Flowers’ Cork St Gallery until the 16th of April. 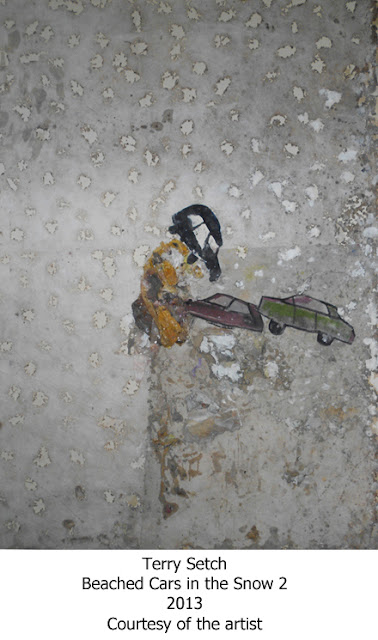