“The painting, and my experience in the studio
— and I think most painters would say this —
is really all there is.
The rest of it is fluff.”
Louise Fishman

Whilst for the American abstract painter Louise Fishman the exploration of being a woman, a lesbian and a Jew may have driven her painting, it is her works revelatory ability that has sustained her practice.

As she told the Brooklyn Rail’s Sharon Butler “One thing I will not do is make paintings that don’t teach me something. I often destroy something—not destroy it and throw it away, but scrape it down or repaint it or something, unless it really does something that’s like, “Oh!” and teaches me something.”

Fishman grew up in Philadelphia with her mother Gertrude Fisher-Fishman and her aunt Razel Kapustin who were both recognized painters in their own right. And whilst she claimed little influence form them saying “I don’t think I’ve really paid attention to the connections with my mother and aunt. I’ve always said, “Oh yeah, they were painters but I wasn’t interested in what they were doing.” A joint exhibition in 2012 at the Woodmere Art Museum Generations: Louise Fishman, Gertrude Fisher-Fishman, and Razel Kapustin forced Fishman to re-evaluate their influence.

As she explained “That is so striking to me now; during the last few months as William Valerio, the director of the Woodmere Art Museum, began putting the works together by the three of us, my mother, my aunt, and myself, I was stunned by the connections he was able to make. He has worked hard to restore Razel’s reputation. She was a major artist in Philadelphia and he’s told me things that even I never knew about her. He has pointed out things visually that I had never seen.”

Both of the elder women were figurative artists, her aunt in particular. As Fishman told Artsy’s Alexxa Gotthardt “My aunt didn’t believe in abstraction because Pollock was in her class with Siqueiros. According to her, Siqueiros used enamel way before Pollock, and Pollock just stole his ideas.”

Ignoring this advice Fishman became an abstract painter ranging from minimalism to expressionism. It was during the 1960’s and 70’s that she embraced Feminism and came out as gay. In part due to the male dominance of art history.

As she said “there’s not one woman in these books. Mary Cassatt wasn’t even there. And I thought, ‘I must be a fake, because everybody in this group of painters I was friends with were men.’ And then I thought, ‘That’s it. I’m gonna start from scratch, and I’m gonna do only what comes out of me and is not identified with a male artist… My work changed a lot around then, and what changed it most dramatically was being involved in the women’s movement—I found my voice there.”

And it’s a voice that still resonates today, although with a prevailing caveat “If I couldn’t introduce new experiences, materials, ideas into my work, I would be bored and there would be no reason for me to continue.”

Her current exhibition Louise Fishman: A Retrospective is on show at Purchase Collage’s Neuberger Museum of Art until the 31st of July. 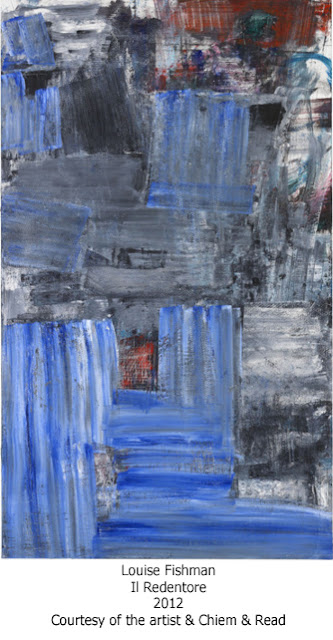