Branding Street Art for the Gallery 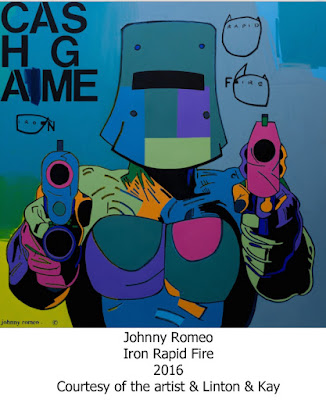 “I want my works to be viewed like TV.”
Johnny Romeo

As a teenager, the self-described Neo-Expressionist Pop artist, Johnny Romeo, along with his friends, tagged the inner city streets of Australia’s largest capital city, Sydney.

As he explained to the British magazine Sublime Zine “We were simply reckless, energetic, crazy kids on skateboards tagging, drawing and painting our youth away. We were trying to find ourselves and in doing that, trying also to identify ourselves in the world in which we lived… We were like suburban dogs trying simply to mark our territory.”

Growing up Romeo was drawing constantly inspired by television, magazines, books and journals. “Drawing was something I did every day for fun,” he says.

In particular drawing in front of the TV saw the young Romeo reproduce the stream of images that confronted him, be they program or commercial.

“I grew up watching TV. I was fascinated by the lives and the stories I saw on TV. I was fixated by the catchy persuasive commercials that got inside my head… I was unaware I was living in a constructed television world. I thought it was normal to feel like part of the Brady Bunch family. TV gives us so much fulfillment and we can’t help but relate to the stars and the stories. As a child I did and as an adult I still do… Although today I watch cable and DVDs rather than free to air,” he explained.

After a stint at the University of New South Wales’ Collage of Fine Art, where he was introduced to the work of the American Pop artists of the 1960’s and 70’s, Romeo has stamped his personality onto the genre. Which apart from his use of candy colors Romeo’s use of ironic, parodistic or repetitive text is an integral part of the work.

About which he told the Artist’s Profile magazine “The use of language in my paintings is important. I often like to think of the text in my paintings as television ‘ad-breaks’ on canvas, filtered through the syncopated cadence of Beat poetry and rap music.”

Over the last decade, as Romeo has been building his brand, his work has transitioned from the street to the gallery becoming more planned and structured along the way.

As he says “I don’t consider my work as being street art per se. While I adopt the ethos and techniques of street art in my works, my aim now is to bridge the divide between graffiti and fine art. My paintings are a melting pot of all my influences: Expressionism, Neo-Expressionism, Cubism, Fauvism and Street Art.”

Romeo’s current exhibition When We Ruled the World is on show at Linton & Kay’s Perth gallery until the 4th of April. 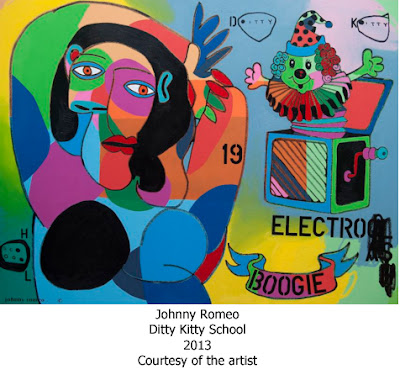