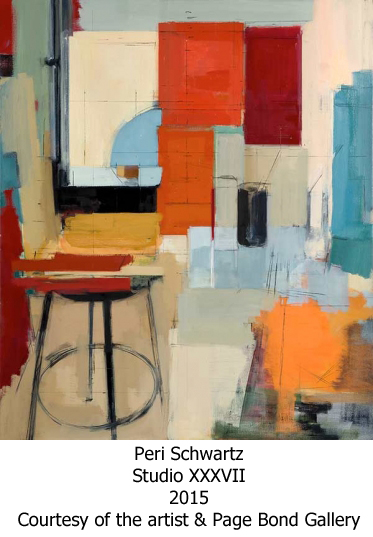 “The one thing I don’t want a painting to look like when it’s finished is finished.”
Peri Schwartz

For the American artist Peri Schwartz whose oeuvre encompasses painting, drawing and printmaking her studio is her sanctuary.

As she told the New York Times “One of the things that has always been important to me is that I’m really alone when I’m painting. They make jokes in my family that “nobody’s allowed to call Peri in her studio.” When I was looking for space, I did look at some of the community spaces that have been provided for artists.  I realized I wouldn’t be happy in that situation. I just didn’t want someone coming by asking to borrow linseed oil or asking what I thought of their paintings. I didn’t want to think about anyone’s work but my own.”

Such is Schwartz’s involvement with her studio that the paraphernalia of her working life features as the subject of her paintings, drawings and prints. Her semi-abstract renderings of the still lifes she creates from the tools and supplies of her trade have been described by the Huffington Post’s John Seed to “have the expressive vitality of perfectly executed chamber music.”

And about which Schwartz told The Painting Perceptions Blog’s Cody Upton “I want to make these exquisite, organized things that sit on the edge of abstraction. My paintings are realistic—you do get a sense of space—but they are also abstract… I want it to be an open question. Things shouldn’t look like they’re exactly where they’re supposed to be. The composition shouldn’t feel stagnant.”

Schwartz archives this through the inclusion of an often visible grid within her works.

As she has explained “In art school, the practice of looking at a painting and dividing it into a grid was introduced as a compositional device. Later, when I was doing self-portraits, I had to get my body in the same position every day. I was working from life, in front of a mirror, and I started to mark lines on the wall behind me so that I would know where to position my head and arm. Soon I included the lines in the painting. They became part of the composition.”

A dedicated fan of small ensemble classical music, Schwartz translates the experience of the musician’s interaction into her own work.

As she says “I go to concerts frequently and aside from getting emotionally involved in the music, I like to watch how the musicians communicate with each other. When I am back at the studio, the relationships between my still life objects remind me of the communication I observed between the musicians.”

Schwartz’s current exhibition Constructing From Life is on show at the Richmond, Virginia’s Page Bond Gallery until the 26th of March. 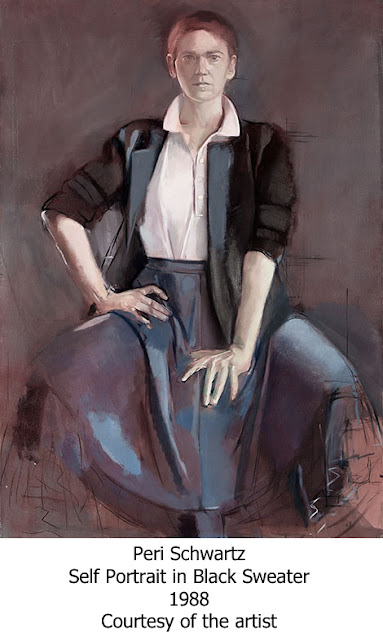