Reflections on Humanity Through Art 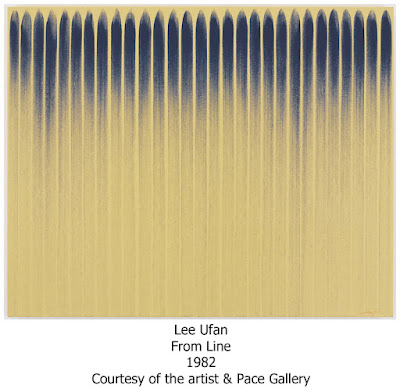 “Our body does not belong just to us. It creates a relationship with the world. And this relationship is the most interesting thing of all.”
Lee Ufan

In a 2011 article New York’s Brooklyn Rail Magazine described the Korean born painter and sculptor Lee Ufan, who currently shares his time between Japan and France, as being an artist who “is more of a philosopher who expresses his ideas through art.” And whilst he abandoned art school in Korea to study philosophy in Japan in his twenties, it is a descriptor that Ufan is not entirely comfortable with.

As he told Apollo Magazine’s Martin Gayford “My painting is a game, with the canvas as my opponent. There is a tension between myself and the canvas, and the brushstroke is the product of that tension. So I am not entirely in control… In my everyday life, I use logical ways of thinking that I learnt. So in some sense it has been useful; but having said that, I don’t want to turn philosophy into art. Philosophy is based on reflection, thinking. Art is an action, based on our emotion or perception.”

Although when viewing Ufan’s work, with their nod towards minimalism, a sense of self contemplation inevitably arises. This is particularly true of his sculptural pieces that explore time and the relationships between the manmade and the natural.

About which he has said “Stones are the oldest thing we ever encounter in our world. There is an unimaginably long time inside them: a kind of concentration of several hundred million years. And within a stone there are elements we can use to forge a metal such as steel. I really value what does need to be made, the uncreated, the not made. My aim is to make the not-manmade speak. I really want you to hear the voice of these things: to put the manmade and non-manmade in juxtaposition. This combination is fundamental for me.”

This philosophical underpinning is also evident in the museum dedicated to his work on the Japanese island of Naoshima; a collaborative project between Ufan and the architect Tadao Ando.

As he explained “What I really wanted to make was a space like a cave. Something that would be like entering and leaving a tomb, or a human body. The final result is not a space conceived by an architect, with the artwork installed in it afterwards. Not at all. Ando couldn’t have done it on his own, nor could I. Our two sets of ideas were juxtaposed to create what you see. Fortunately, Ando is an old friend of mine, so there were no quarrels or disagreements. Our discussions went mysteriously smoothly.”

It is this interaction with its philosophical implications that perhaps ultimately drive Ufan’s production.

As he told Frieze Magazine’s Melissa Chiu “It’s important to think about holding back and stopping to think, to be quiet, and to think of ourselves as part of the universe. Humans shouldn’t be at the center of it. And we should be more reflective about who we are and what we do.”

Ufan’s current exhibition of New Works is on show at Hong Kong’s Pace Gallery until the 9th of January. 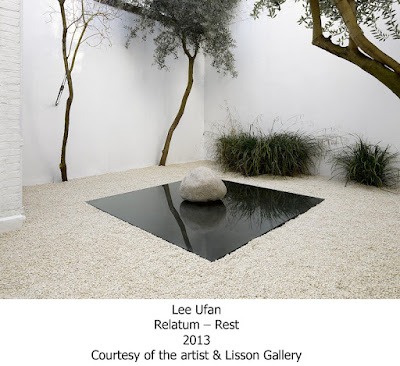 Very interesting view on art... A game... Philosophy towards Arts.