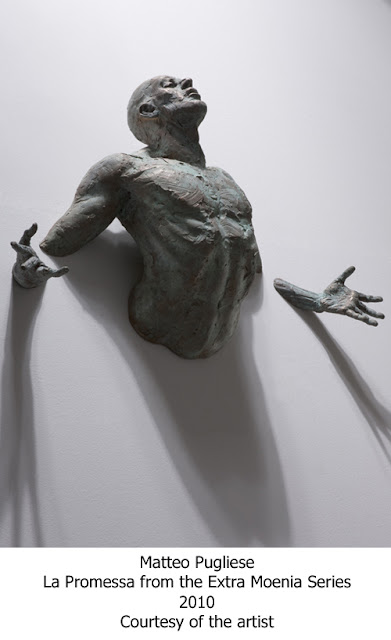 “I think Dreams represent the central nucleus around whom my works move.”
Matteo Pugliese

For the self-taught Italian sculptor Matteo Pugliese the realization of his dreams is the main idea that informs his work and his life.

As he says in a video for his current New York exhibition “The continuous feeding of my dreams is my main objective, my major desire, what makes me feel alive.”

It is an idea he explores in his signature body of work the series Extra Moenia (outside the walls) which depict muscular bronze men emerging from walls.

“All obstacles we encounter while we try to make our dreams come true, often, if not always are walls we build around ourselves. Trust, conviction and tenacity always brings us to turn these walls into something weak, fragile and make them disappear,” he has said.

And it is an experience he has lived. As a child growing up in Sardinia’s capital city Cagliari he was fascinated with drawing and sculpting but studied Modern Literature at the University of Milan. Upon graduation Pugliese worked at a variety of jobs that ranged from being a phone jockey in a call center to selling magazine advertising space whilst indulging his hobby in his spare time.

As he has said “I never thought about becoming an artist.”

But a girl friend suggested he exhibit his work. Once he got used to the idea Pugliese went ahead and organized an exhibition of his work in a hired space. It was a move that changed his life. Within 18 months he had a second exhibition in a commercial Milanese gallery and a few months later his work was on show in Brussels.

Since then Pugliese has gone on to produce a second major body of work the Guardians; ethnically diverse armored figurines based loosely on the stone guardians venerated by the Balinese animists.

Whilst inspired by his dreams, Pugliese is not a slave to them.

As he explained in an interview with the Bertrand Delacroix Gallery “I sometimes make sketches, but mostly I start working directly in clay and let the idea drive my movements. I try to keep myself malleable, ready to re-set my initial idea. I am an observer who tries to notice what’s interesting while modeling the clay: the sudden or unexpected position of a shoulder or a muscle, the expression of a face, et cetera. From there I go on working and “build” the sculpture. I like to imagine this process as a spiral winding up towards an unknown location, often one quite different from my initial idea.”

Pugliese’s current exhibition Breath of Freedom is on show at New York’s Bertrand Delacroix Gallery until the 4th of December. 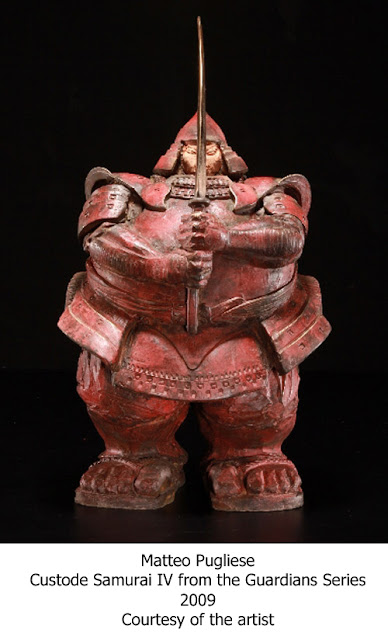