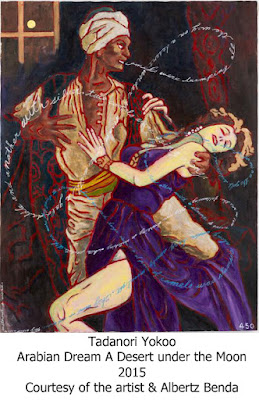 “The past and the present become one.”
Tadanori Yokoo

In his mid-40’s the Japanese painter Tadanori Yokoo converted from graphic design to fine art inspired by the work of Pablo Picasso.

As he told The Japan Times’ Edan Corkill “The day I had that realization was the day I went to see an exhibition of work by Picasso at MoMA… It was instantaneous. It was extraordinary. When I entered that exhibition I was a graphic designer and when I left I was a painter. It was that quick. I was struck by how his whole life seemed to be led for creative ends — for self-expression.”

Growing up in rural Japan, Yokoo enjoyed copying drawings of historical figures from his collection of picture books as a child.

“For me, drawing was copying. Back then, I never intended to become an artist myself,” he recalled.
After graduation from high school Yokoo started work at a printing company followed by a stint at the Kobe Shimbun newspaper which led to a position with an advertising agency, all the while learning his design skills on the job.

In 1960, Yokoo moved to Tokyo with the advertising agency but quickly moved on to dedicated design company. It was here he came in contact with the concepts of modern design.

About which he has said “I had a very strong yearning for this modern design, but at the same time I had been raised in a kind of premodern age — a nativist kind of climate, where the old ways remained in place… But at the same time, I had this lingering doubt about whether I really should be doing something simply as a job or if I should try to do it as a work of art. You know, it’s all very well to be in sync with the trends of the day, but is there something of yourself being expressed in the design? Is it really your own design or not? So then I went through this process of thinking that I should try to incorporate those premodern or nativist elements into modern design. And it was from that point that what is really my own design was born.”

An important element in his designs was a black humor - sophisticated, dry, thoughtful and self-deprecating. Which combined with his premodern sensibilities saw him regarded as somewhat anti-design outsider by his contemporaries within the local design community.

As he says “Even if I try to make works that I think are funny, no one laughs at them. They will fold their arms and look sternly at them. Japanese are like that.”

But his work played well in the West in general and America in particular. At his first exhibition at a New York commercial gallery in 1967 the Museum of Modern Art purchased all his work paying the same price that Andy Warhol’s Marilyn Monroe prints commanded. And five years later the museum mounted a solo exhibition of Yokoo’s work.

Now in his late 70’s Yokoo is an established artist in his home country with a Museum in Kobe dedicated to him.

Requirements that for Yokoo, who claims his painting is a collaborative process between himself and the canvas, are driven by his memories.

As he says “I guess it comes from my own philosophy, my own thoughts. It’s my outlook on life, my outlook on death. It’s everything. All of it is blended in there together, but it is all separate too. All those things are elements flying around in my mind. And sometimes those things come into alignment. I guess the real foundation is my own experience, my own memories. They are the ultimate source of all those thoughts.”

His current exhibition Tadanori Yokoo: 49 Years later is on show at New York’s Albertz Benda gallery until the 19th of December. 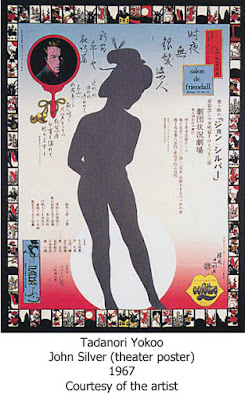 Your post is just outstanding! thanks for such a post,its really going great and great work.Visit Graphixtron.com! Logo Makers in Hyderabad.