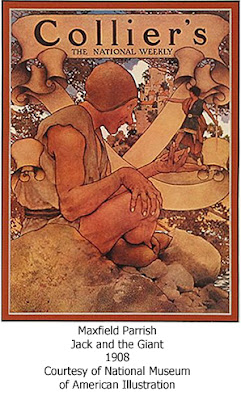 As the art critic Robert L. Pincus wrote in his review of the 2005 exhibition Maxfield Parrish: Master of Make-Believe “Maxfield Parrish began his career making illustrations and book covers for children, like the charming Humpty-Dumpty image for L. Frank Baum's first book, "Mother Goose in Prose." A few years later, when his visions of women and girls in enchanted landscapes became the rage, he had performed a clever shift in strategy, making children's art for adults.”

An excellent draftsman which combined with his luminous use of color, that saw Parrish Blue named in his honor, Parrish’s allegorical compositions employed the use of the geometric principals of root rectangles and the golden ratio in their construction. And more often than not his paintings were made to be reproduced as prints.

As Hilarie M. Sheets wrote in her New York Times review of the book Maxfield Parrish: 1870-1966 “From the outset of his career, Parrish hitched his fortunes to the technologically expanding publishing industry, doing his first magazine cover for Harper's Bazaar in 1895 and thereafter earning mass-market popularity with his winsome book illustrations, art posters, calendars, theater sets, murals and paintings -- some, like ''Daybreak,'' specifically commissioned to be reproduced and sold as prints.”

In his 60’s Parrish abandoned his allegorical subjects to concentrate on landscapes.

As he is reported to have told the Associated Press in 1931 “I'm done with girls on rocks! I've painted them for thirteen years and I could paint them and sell them for thirteen more. That's the peril of the commercial art game. It tempts a man to repeat himself. It’s an awful thing to get to be a rubber stamp. I'm quitting my rut now while I'm still able.”

Although his subject matter changed Parrish maintained his commercial links producing commissioned works for the Minnesota-based calendar company, Brown and Bigelow but without the popularity of his earlier ‘escapist’ works.

In the 1960’s, when Parrish was in his 90’s, there was a resurgence of interest in his work in association with the pop art movement. And like Andy Warhol who once said “Being good in business is the most fascinating kind of art,” Parrish was proud of his business acumen having reportedly described himself as “a businessman with a brush.”

The exhibition Maxfield Parrish: Paintings and Prints from the National Museum of American Illustration is currently on show at the Nassau County Museum of Art until the 28 of February next year. 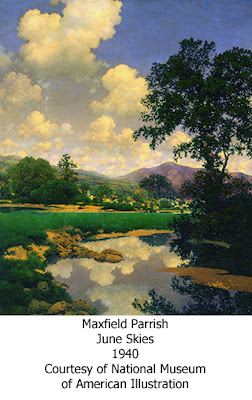