The Power of Graffiti 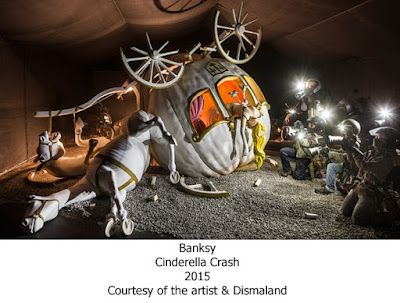 “I'll never get lonely with all these visitors.”
Huang Yung-fu

A week ago the world famous secretive graffiti artist Banksy opened his latest offering, Dismaland. About which he said “It’s a theme park whose big theme is – theme parks should have bigger themes.”

With the help of 58 other artists Banksy has created an ironic parody of Disneyland.
From the Cinderella Crash in a derelict version of the iconic Disney Castle where Banksy has placed the deceased fairy tale heroine amidst the wreckage of her pumpkin coach surrounded by paparazzi to Darren Cullen’s “Pocket Money Loans” shop with its 5000% interest rate, Dismaland is “a bemusement park.”

As Cullen told the Guardian Newspaper “It is just amazing having this much sarcasm in one place.”

Dismaland is scheduled to run for 36 days and is anticipating the attendance of 144,000 visitors.

Meanwhile half a world away on the island of Taiwan the Rainbow Village is attracting a million visitors a year. Mostly from Asia, the visitors are flocking to see the graffiti of the 93 year old retired soldier Huang Yung-fu.

Originally from Hong Kong, Huang was a member of the nationalist Kuomintang (KMT) army and after its defeat by the communists in the 1949 Chinese civil war he followed his leader Chiang Kai-shek to Taiwan. Along with other veterans he was given a two room bungalow in the Nantun district of Taichung City.

As Huang told Agence France Press (AFP) “"We had a letter five years ago saying the government wanted to knock it down to build something new. They said we could take some money or move to a different house. But I didn't want to move. This is the only real home I've ever known in Taiwan."

It was a lure his neighbors found hard to resist and Huang soon found himself the enclave’s sole resident which is when he started painting. As he explained “I was the only person left in the village and I was bored. My father taught me how to paint when I was five years old, but I hadn't done it since I was a child. The first thing I painted was a bird inside my house."

Once he had covered the interior walls of his bungalow Huang moved outside and started to decorate the walls of his house and then the abandon houses that surrounded his. Depicting dogs, cats, planes and his favorite celebrities, including kung fu legend Bruce Lee, Huang’s cavalcade of images attracted the attention of local university students who agitated for their preservation.

They were successful and Huang’s house has been spared the developers wrecking ball. As he confirmed “The government has promised me they will keep this house and this village."

Now after his daily four hour early morning painting session Huang sits back and watches the crowd. "I like speaking with them and they tell me the paintings are beautiful,” he remarks. 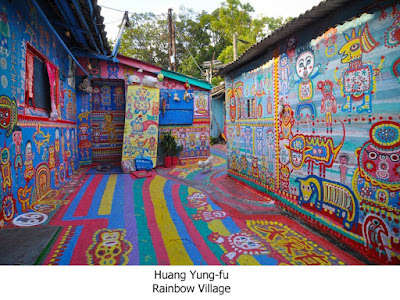