First published in the News & Buzz section of www.artslant.com

Copyright questions raised by the fair use clause in the law, where appropriated material is used for the creation of a “new” work, are complex; so much so that the courts decide them on a case by case basis. In this digital age, the ubiquity of copyright infringement has ensured that the Associated Press/Shepard Fairey dispute over the “Hope Poster” is destined to remain front page news for some time to come. 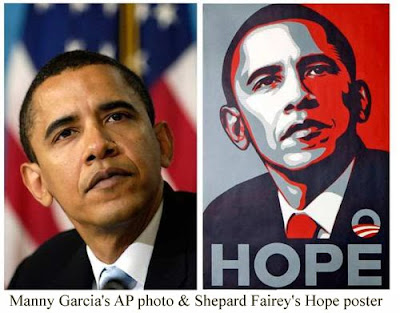 Shepard Fairey lied to the court about which Associated Press photo he used as a basis for his “Warholianesque” poster and fabricated evidence of support has done his cause more harm than good. Fairey has stated “The new filings state for the record that the AP is correct about which photo I used as a reference and that I was mistaken. While I initially believed that the photo I referenced was a different one, I discovered early on in the case that I was wrong. In an attempt to conceal my mistake I submitted false images and deleted other images. I sincerely apologize for my lapse in judgment and I take full responsibility for my actions which were mine alone. I am taking every step to correct the information and I regret I did not come forward sooner.”

The fallout from this statement has seen his legal team withdraw from the case and Associated Press add the brand launched by Fairey, Obey Clothing, as a co-defendant. Associated Press have also claimed that Fairey profited from the work which was originally available as a free down load during the 2008 US Presidential race.

With copyright laws designed to encourage creativity and innovation, rather than restrain it, how the courts decide on this case will be of intense interest to artists and others for whom remixing is an important aspect of their work. As the LA Times editorial of November 1 concludes “The dispute between Fairey and the AP offers a chance to make that line a bit clearer. We don't think the court should condone his deception -- some kind of sanction would be appropriate. Yet that should not tip the balance the court must strike between creators and those who follow them.”

As a photographer its kinda scary when folks can just pull your stuff on your site and play around with it and then call it their own. However, fast and loose is the way the game has always been played.

I hear you concern, but post it on the www and expect it to be stolen, mashed and/or remixed. I guess if it is so treated it is a compliment.