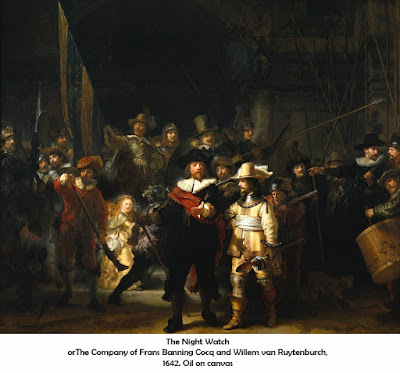 Greenaway is most widely known for his films, The Draughtsman's Contract, a 17th Century murder mystery, The Cook the Thief His Wife & Her Lover, described as a corrosive allegory of life in contemporary England and his interpretation of Shakespeare's The Tempest, Prospero's Books. He trained as a painter but moved over to film making with the making of his first film ‘The Train’ in 1966. With his interest in Renaissance painting in general and the Flemish painters in particular, an influence that is a hallmark of many of his films, it is little wonder he should turn his attention to the 17th Century masterpiece.

The Company of Frans Banning Cocq and Willem van Ruytenburch, more commonly known as ‘The Night Watch’ is renown for its size (11ft 10in x 14ft 4in), the effective use of chiaroscuro and the sense of movement in an otherwise traditionally static scene. It is on permanent display at Amsterdam’s Rijksmuseum and is considered to be the museum’s most famous painting.

In ‘Rembrandt's J'accuse’, Greenaway presents the debatable conspiracy theory that Rembrandt, through subtle hints in the painting, puts all the characters involved in a complex and devious conspiracy to murder. The ‘evidence’ offered by Greenaway are the numerous details in the painting that were never noticed before or that were simply not correctly interpreted. He also implies that Rembrandt’s social and financial ruin that followed the completion of the work was an act of revenge by the paintings cast.

More information about Rembrandt and his work can be found here and about Peter Greenaway and his work, here.