Photoshop, the photographic post production tool of the new century, is either loved or despised by photographers, depending upon their aesthetic vision for the medium. But in Harry Brant Chandler’s exhibition “Dreamers in Dream City” it along with other computer processes comes into its own. 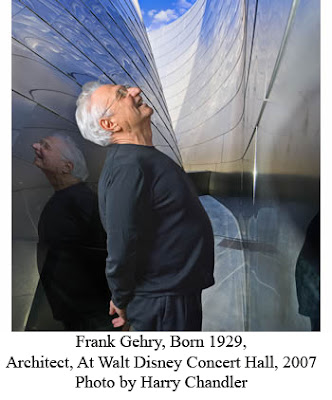 Chandler had only 15 minutes to get a snapshot of the Walt Disney Concert Hall architect Frank Gehry. From the architect’s conference room portrait of his interpretation of Rodin's Balzac, Chandler super-imposed the snapshot upon the Los Angeles’ landmark he created. And so it is with the other 54 portraits in the exhibition.

From aviator Amelia Earhart to the Watts Towers creator Simon Rodia, from musician Jim Morrison to author Raymond Chandler, all are placed within the context of the dreams they realized. "I wanted to place the subjects in the context of their specific environments that showed what their dreams were about," Chandler says.

Renown as the city of dreams, Los Angeles attracts hopefuls from around the world, particularly to the Hollywood studios. But this exhibition goes beyond tinsel town and celebrates the builders, the inventors, the artists, the folk heroes, the activists, the entrepreneurs, the discoverers as well as the entertainers.

As the executive director of the Museum of the American West at the Autry National Center, Jonathan Spaulding, says "What Harry has done is create something which is authentic to his interpretation of these particular people and the story of Los Angeles."

Chandler’s manipulated photographs are on display at the Autry National Center until January 3, more information and a selection of images from the exhibition can be seen here.