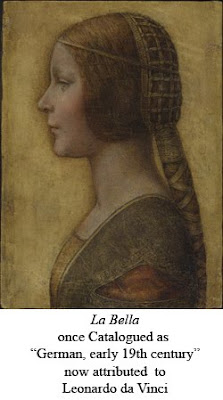 Examination of the work by a “multispectral” camera, a process that reveals each successive layer of colour, and enables the pigments and pigment mixtures of each pixel to be identified without taking physical samples has found a finger print on the work that is “highly comparable” to one on a Leonardo work in the Vatican. This has seen Martin Kemp, Emeritus Professor of History of Art at Oxford University claim the work to be by Da Vinci. Although skeptical at first, this and his other research has confirmed the works authorship. “All the bits fell into place like a well-made piece of furniture. All the drawers slotted in,” he is reported to have said.

Now valued at over $160 million and titled “La Bella” the portrait is expected to go on display next March in the exhibition And There Was Light: The Masters of the Renaissance Seen in a New Light at Eriksbergshallen, Gothenburg, Sweden. The exhibitions artistic director, Professor Alessandro Vezzosi, is amongst the growing number of art historians who believe the portrait to be work of the Renaissance master.

Included in that number is Professor Carlo Pedretti, head of the Fondazione Pedretti for Leonardo studies who has said “this could be the most important discovery since the early 19th century re-establishment of the Lady with the Ermine as a genuine Leonardo”.